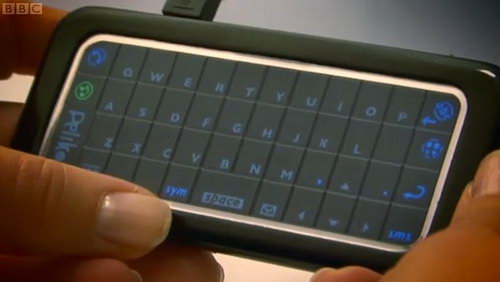 During Pepcom’s MobileFocus event at this year’s Mobile World Congress, I had a chance to check out a company called Pelikon. They make an interesting keyboard/keypad module designed for use in mobile phones and similar devices (MIDs?). It’s called MorphTouch and it’s touted to “revolutionize the user experience by adapting to the way you want to use it.”

How it does that? It shows different keys depending on the application used, working both like a regular physical keyboard and a touchpad. For instance, when you’re typing an email or some document, you’ll see a regular QWERTY keyboard; when playing a game, MorphTouch will convert into a gamepad. Similarly, carriers could program the module with dedicated keys for accessing specific services — something that according to Pelikon could lead to increased ARPU.

Motorola used something similar on its ROKR E8, which morphed numeric keypad into a dedicated music playback keys when needed. Likewise, Samsung Alias2 had that e-ink keyboard that changes to numeric keys to fit the application used at any given moment.

Here’s how it works on a technical level:

Toshiba has one phone using MorphPad, though unfortunately that’s a Japan thing only. I would love to see MorphTouch integrated into some high-end smartphone, which would be available throughout the world. Hopefully, Pelikon is pitching handset makers as we speak. 😉

Get ready to pay more if you use a lot of mobile data, as AT&T's Chief Executive Officer Randall Stephenson said...