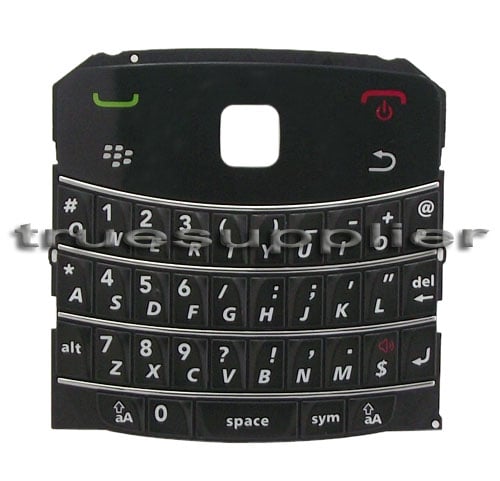 OEM parts reseller TrueSupplier is listing the keypad for the unreleased BlackBerry 9100 Pearl, showing this picture of a QWERTY layout – but wait, isn’t the Striker supposed to be SureType (two letters crammed into one key)? Colour me confused, but this doesn’t look anything like what we were expecting to land on TELUS. It’s not only the keypad style that’s different, but the extra keys surrounding the optical trackpad are laid out differently too – more like they’re oriented around the four corners, such as with the Pearl Flip, rather than two to either side, like every other standard BlackBerry out there. One way or the other, this is a keypad we haven’t seen anywhere else yet.

So, let’s weigh some options. Either all of those early looks were of preproduction prototypes, and RIM has since seriously redesigned the device, or this keypad is for yet another unreleased BlackBerry that we have yet to see. The keypad certainly takes a chapter from the Bold’s playbook, so it’s entirely possible this keypad is for the Dakota that we’ve been hearing about, which will host a trackpad, QWERTY keyboard, and a SurePress touchscreen.  If that hole for the trackpad is properly to scale, this keyboard will be hella tiny. I have problems enough on the Tour and 9700’s keypad, and if this one actually saw the light of day, the 9100 would be a complete write-off for me.

BlackBerry 9100 Pearl (Striker) Coming to TELUS in Pink and Black?

According to tipsters, the BlackBerry Pearl 9100 (code-named Striker) will be coming to Canada's TELUS in both black and pink...