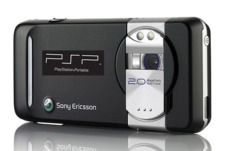 Here we go again. Sony is reportedly preparing to make a phone that will be able to play PlayStation games.

Sony will be working hard with Sony Ericsson to create a mobile gaming device that can make calls, surf the web and listen to music. The handset should be able to connect to Sony’s online content services and it will likely be able to play many original PlayStation games. As always, there’s nothing official, but “sources close to the matter” said it should hit the market by the end of the year.

This has seemed like a logical progression for the last few years because the PSP is getting long in the tooth and the PSP Go was a tremendous flop. Additionally, we’re heading for an era of convergence that could make dedicated mobile gaming devices irrelevant. Apple has already positioned its iPod Touch as a quasi-gaming device and many big-name game makers have already created apps for the iPhone. It’s not just the bigwigs, as PopCap Games was recently able to make $1 million with its Plants vs. Zombies game in only nine days.

Sony may have the pieces to make a PlayStation phone work. For all its occasional weirdness, I think Sony can still design some lust-worthy gadgets. The iPhone has shown that you need strong hardware and a content ecosystem to be really successful in the smartphone space. Sony’s online service will have similar offerings as  iTunes, so it should have the content base covered (unless there’s a network outage). There’s still a huge question about what operating system would power such a device but, knowing Sony, it will be something proprietary.

Sony Ericsson has been struggling over the last few years and a PlayStation phone could be the thing to get it back on track. Again, these are rumors that have been kicking around for years, but this one seems to have a bit more juice behind it. Are you interested in a PlayStation phone?