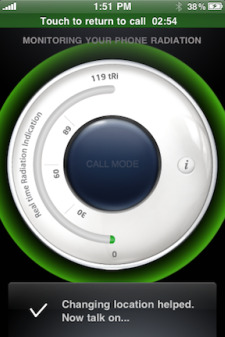 I think it’s a crying shame that Tawkon’s iPhone application won’t be allowed in the App Store because it seems like a well-crafted program that could find a large audience.

I’m not too concerned about my cell phone’s radiation but I know a lot of people are. According to Tawkon’s technology page, the app uses an algorithm to determine how much radiation your iPhone is giving off at any given moment and it offers real-time suggestions on how to lower this. This algorithm takes into account known quantities like the radios in the phone as well as variables like distance from the base station, or proximity to the face. The radiation level will change depending on your location or even how you’re using the phone, Tawkon said.

To be fair, this app is only giving a prediction because you’d need expensive equipment to truly measure radiation, but if the algorithm is correctly programed, it should be a great indicator of how much radiation the device is emitting. The app also includes integration with the contacts list and dialer so you can keep an eye on radiation while making calls. Tawkon is hoping to sell the app for $5 to $10 dollars but don’t look for it in the App Store any time soon.

This marvelous feat of software development won’t be coming to your iPhone because Apple told Tawkon, “a diagnostic tool of this nature would create confusion with iPhone owners from a usability perspective.” Bull spit. Apple is just worried about how this would look from a public relations standpoint. This is another case of Apple’s arbitrary rules potentially ruining a developer’s livelihood. This isn’t some silly boob app either, this appears to be a well-done piece of software that took 18 months to create. Furthermore, I could see a lot of iPhone users interested in this because the topic has yet to fully be figured out.

Tawkon plans to bring the app to BlackBerry and Android, where it won’t really have to worry about such silly rejection rules.