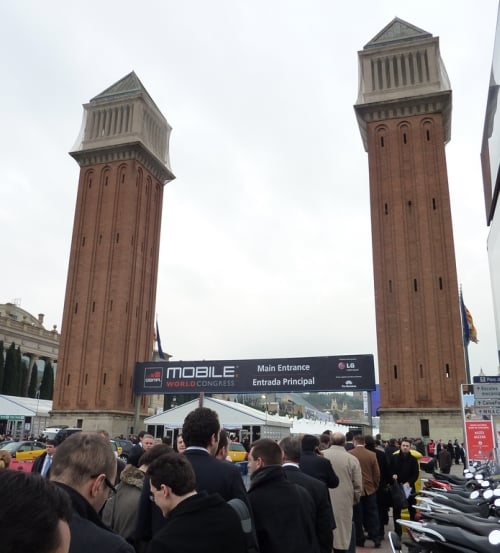 Three weeks ago today I, and about 50,000 other people, walked through the two towers that stand at the entrance of the Fira de Barcelona and attended the first day of Mobile World Congress 2010. This was my second time at the show, and for some of my colleagues it was their third visit, so we all had a rough idea of what was going to happen. Expectations were set appropriately low, with only a few glimpses of hope for Windows Mobile 7, Android, and … well that’s it. Several days later, after many sleepless nights, and a dash of food poisoning thrown in for good measure, we left the press room exhausted, defeated by terrible upload speeds, and a general feeling that none of us wanted to talk about phones for the next few days.

It’s taken me this long to write a post Mobile World Congress report because I walked away from the show feeling a bit disappointed, and have been struggling to pin point what, if anything, was impressive enough to be worth remembering. If this show is to set the tone of 2010, then I’m afraid it’s going to be a year that mobile phone enthusiasts like me, you, and the other people reading this, are going to do nothing but sit on our asses and twiddle our thumbs. Let’s start with devices. 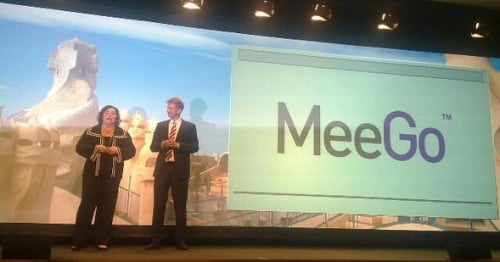 Nokia didn’t announce anything. They didn’t even go to the show. They rented out a building that housed a foundation that supports people who are blind, invited every single member of the press covering the show to a keynote held in a large auditorium, and then announced that Maemo is going to be called MeeGo at some point in the future after merging with Intel’s Mobiln. Then they spent the next hour or so throwing out statistics about their Ovi services, while at the same time reminding people that Nokia ships the most number of devices compared to anyone else in the industry. Was I bored? Let’s put it this way, it’s one of the few press conferences I walked out of in my life. 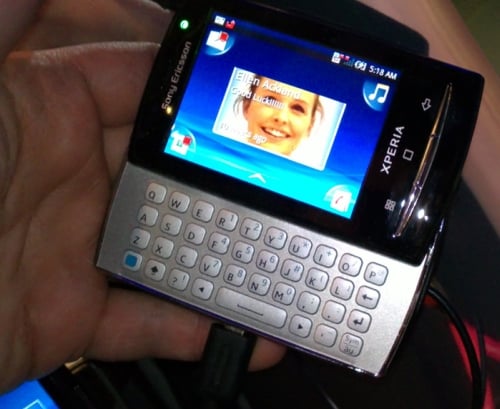 Sony Ericsson added a keyboard to a device that’s not selling since it’s a bit of an ugly duckling, and slapped the word “Pro” after the model name. Then they took an Android device that they’ve been having trouble getting out to market, shrunk it down, and made plans to sell it in two different models: one with, and without, a hardware keyboard. Worst part of the press conference was that no prices were announced, and that really makes or breaks these devices. No one is going to spend 450 EUR on the “X10 Mini Pro”, a figure that was given to me by a Sony Ericsson employee who shall remain nameless. 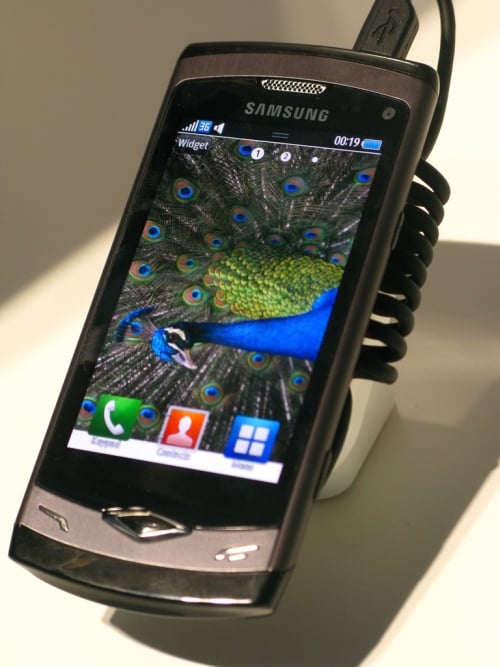 Samsung’s Bada … yet another mobile phone operating system to deal with? Their Wave looks absolutely beautiful because of that new 3.3 inch “super OLED” screen. Once you get past the marketing hype and learn that it’s just a regular OLED screen, but with the capacitive element embedded onto the display itself, thereby increasing brightness and visibility, you’re left waiting in suspense for everyone else to make a phone using that screen. That’s Samsung’s secret other business that they don’t hype to consumers, but everyone knows about. Samsung makes components, and lately it feels like the devices they come out with, at the prices they sell for, are more to show other companies what the South Korean firm is capable of producing, and at what volumes, rather than being products for end users. 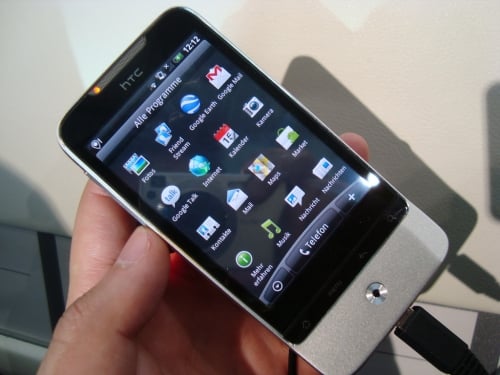 HTC played it safe. The Desire is the Nexus One, with a few minor tweaks. I would have actually preferred to get the Desire rather the Nexus One, since the capacitive buttons on the bottom of my device are horrible, but c’est la vie. The Legend is nothing more than a Hero in a much, much prettier body. Considering the Hero is going to turn 1 year old this June, it’s about time it got a refresh. The Legend uses a slightly faster processor than the Hero, but that’s not saying much since the Desire, Nexus One, and any other ARM v7 compatible processor, are going to blow last year’s devices out of the water. Think of the performance increase from the iPhone 3G to the iPhone 3GS, that’s the kind of leaps and bounds we’re talking about here. I’m not even going to bother mentioning the HD Mini, it runs the old, ancient, kicked to the curb version of Windows Mobile. 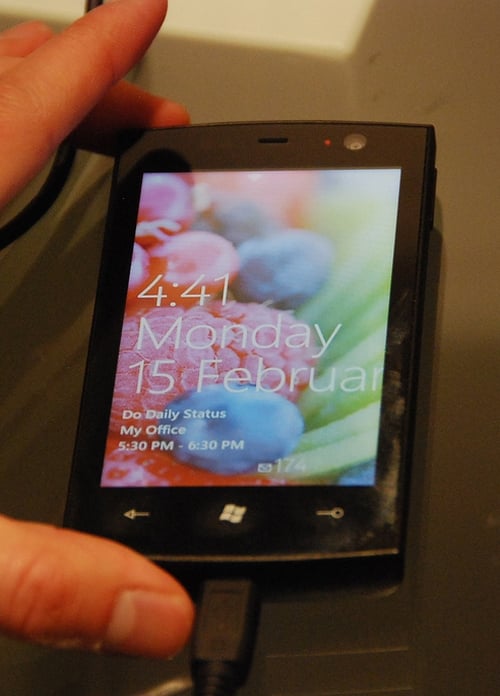 Speaking of Windows Mobile, Microsoft showed off a mobile phone operating system that isn’t going to be on store shelves until the end of this year. That gives them between now and December to miss their deadline, miss the holiday season, and upset several thousand people, while simultaneously shedding a few points off their stock price. That or they’ll make their deadline on time, by sacrificing quality, and then they’ll be back where they started before Mobile World Congress 2010, laughed at by the entire mobile industry. No one ever learns. Show something, and make sure you can ship it very soon after, or don’t bother showing it off at all. To Microsoft’s credit, they blasted the traditional icon based user interface paradigm that mobile phone’s have been using for decades, and arguably peaked with the introduction of the iPhone, straight out the water. It’s something that had to be done. Whether or not it succeeds is a different question, but at least it showed people that something else other than the iPhone can be innovative.

In terms of the nuts and bolts, the stuff that most consumers don’t really care about, but people like you and I might, Mobile World Congress 2010 was nothing but a cock tease. NVIDIA showed off Tegra 2, and it’s powerful as all hell, but with no cellular radios, WiFi, Bluetooth, or GPS capabilities included in the platform, then what’s the point? Qualcomm is kicking ass and taking names right now because they sell people platforms that include application processors, modems, and all the other hardware needed to make a top end smartphone. No one is in the business of picking and choosing anymore. Nokia used to pick the best application process, the best modem, the best this, the best that, because it made sense. When you’re shipping 4 out of every 10 mobile phones made, every penny counts. For most other manufacturers, the new reality is that there are only two market segments now: premium smartphones, and cheap smartphones.

Marvell introduced their “Pantheon” platform, and claim that it’s going to be in devices shipping within the next 12 to 18 months. On paper it’s a boring chip, but what it represents is your typical $500 smartphone from 2007 being taken all the way down to $100 – $150. That’s big, but again, not exciting to people like you and me. ST-Ericsson is following the same strategy with their U6715. I was surprised, shocked even, that Qualcomm didn’t show off anything new, but then I remembered that at Mobile World Congress 2009 they introduced their MSM7227 platform, which like the Marvell Pantheon and ST-Ericsson U6715, is meant to drive smartphones to the sub $200, close to $150, level. No new high performance Snapdragon however, and no new announcements regarding their Mirasol display technology, just more sad and pathetic attempts at pushing their proprietary MediaFLO platform. 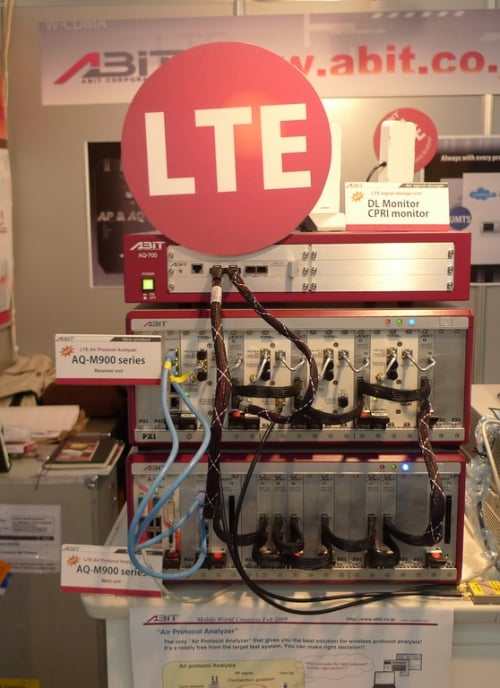 Infrastructure was a little bit more promising. LTE was being talked about by everyone and their mother. Some think that the reports being published now about the upcoming surge in data traffic are nothing but bullshit meant to scare operators into buying more infrastructure equipment, while others think that operators should spend each and every available penny to get ready for a surge in data use so strong that it’ll take down a country’s wireless network after some teenager from Wisconsin makes a viral video that stars a squirrel and a block of cheese. I fall into the latter camp. We’re going to see LTE in 2010, but again, late 2010, and not everywhere, and certainly not in your pocket. You’re going to see LTE sticks sticking out the sides of laptops, you’re going to see 4G being advertised by your operator, even though it’s all marketing nonsense since the ITU hasn’t declared LTE, nor WiMAX, as proper 4G technology, but don’t expect to see LTE inside your mobile phone until holiday 2012, if everything goes to plan, which it almost never does.

It wasn’t all a waste of time. I got to see my colleagues, I got to see people whose blogs I read every day, I got to drink cheap Spanish wine. As much as I don’t want to go to Mobile World Congress 2011, something tells me that once I get that phone call from my boss next winter, I’m going to have to say yes.

Until next year, keep twiddling those thumbs.

FCC has blessed the recently announced Nokia C5 with the seal of approval. Don't get too excited, though, it's the...