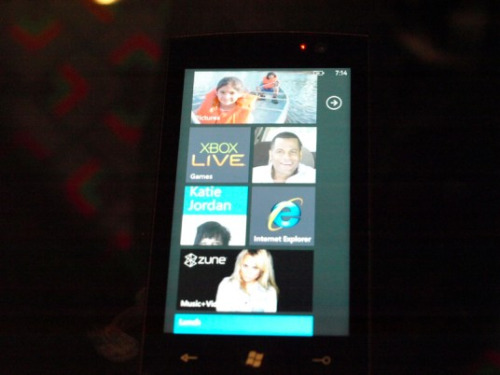 There are still many questions about the intriguing Windows Phone 7 Series from Microsoft, but the company is slowly releasing more details. We already know that it will break compatibility with Windows Mobile and that it will use Silverlight, .NET and XNA for development. That last one is important because it means we’ll see gaming that can go from a phone, PC and XBox 360, and that’s exactly what Microsoft showed off during the Tech-Ed conference in Dubai.

Eric Rudder, Microsoft’s senior VP of technical strategy, showed off a 2D game on a prototype Asus smartphone, Xbox 360 and Windows 7 PC. In the video below, you can see that gamers can seamlessly switch between the platforms without losing their position in the game. The developer can also tailor the game for whatever device it’s being played on. For example, if you’re using a WP7S phone to play, you can utilize touch and accelerometer controls.

The Xbox Live integration and cross-compatibility gaming could be a huge draw for WP7S. Being able to take your games on the go is very convenient and I know many people who have an emotional attachment to their Xbox Live accounts. Right now, Apple’s iPhone is the center of the mobile gaming universe because it offers arguably the best games and, almost as important, it offers the best path for developers to make money. Mobile gaming is only going to grow and these elements may give Microsoft a competitive advantage.

We may get lucky and see some more WP7S gaming developments at this week’s Game Developer’s Conference, but most of the developer details are expected to be detailed at the Mix conference later this month. Yep, we’ll be at both, so stay tuned. In the mean time, check out our hands-on demo of WP7S from Mobile World Congress.

Get Swype for Android right now

Swype is making its interesting touchscreen keyboard available to select Android users in a limited beta. If you don't know,...