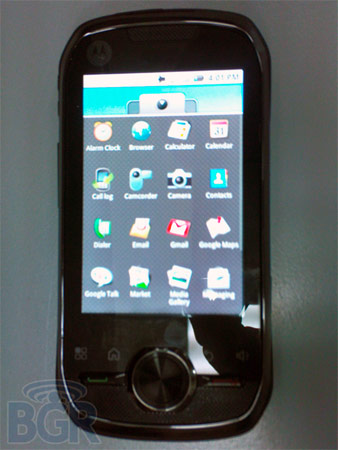 The big buzz on the Canadian mobile scene these last few weeks has been Motorola. News hit us hard that they’re bringing a ton of Android and MOTOBLUR love to the true north strong and free via the BACKFLIP, DEXT and QUENCH. The devices would be sprinkled amongst the ‘big 3’, giving consumers nationwide a good look at what Moto has to offer these days.

Staying with Motorola, rumor has it that TELUS could announce the yet-to-be-released iDEN ‘Opus One’ for use on their MiKE network. Of course this is early days, so hold your horses. No pricing or launch details are available at the moment… However, we do know that the Opus One will feature a 3.1″ HVGA capacitive touchscreen display (320×480), Android 1.5 with MOTOBLUR, 3MP camera with autofocus and video, WiFi, A-GPS, 2.5mm headset jack, enterprise email, iDEN PTT & PTX, microSD expansion, Flash Lite v3.1x, and a lot more.

Stay tuned for more details as they’ll no doubt trickle in surrounding the Opus One (on TELUS and other carriers). A possible announcement from Motorola at CTIA? Me thinks that is highly likely.