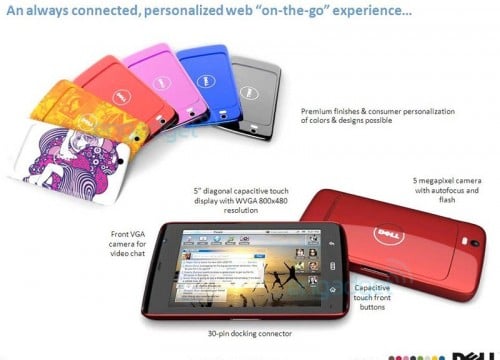 The Dell Mini 5 has been an interesting development from the company, extending  from the Dell Mini 10 netbook. Initially, it was thought that the Dell Mini 3 would be the first device from the manufacturer to hit the U.S. shores, but it looks like the newly named “Streak” will be the first, as a leaked ad has appeared online.

The ads show many different colors that will be offered for the Streak, including blue, pink, red, and a greyish black option. There will likely be a way to customize the back of the device, as the ad shows two colorful designs as well. Customization could possibly come through a third-party, like SkinIt. 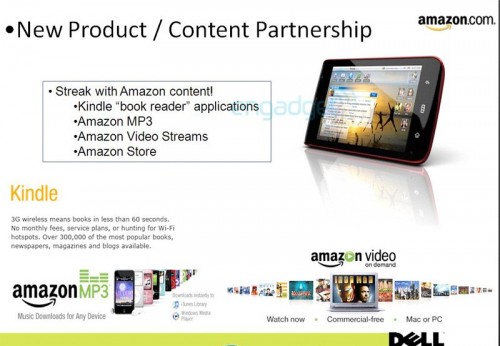 The Dell Streak has a massive 5 inch display, a front  facing VGA camera, as well as a 5 megapixel camera on the back. It also comes with three capacitive Menu, Home, and Back buttons on the side, and a 30-pin dock connector. The dock will probably come later, after the release, but it would be nice if it came right in the box. That might be me asking for too much, though.

What seems to be the best news of the ad is that it looks like there will be a partnership with Amazon for the upcoming device. This means that the Kindle E-book reader, Amazon Mp3, Video Streams, and Store applications will all be available on the Streak. That’s good news, as AT&T can try to push this thing as a tablet, and not just a big phone, which is pretty much what it is.

I’d love to get my hands on this thing at some point, but the rumored unsubsidized price looks outrageous, and if the rumor turns out to be true, then the subsidized price couldn’t look much prettier. Time can only tell, but it looks like the Mini 5 Streak is coming soonish, and hopefully at a reasonable price.

There are a lot of mobile apps out there, making it a little difficult to navigate crowded app stores for...