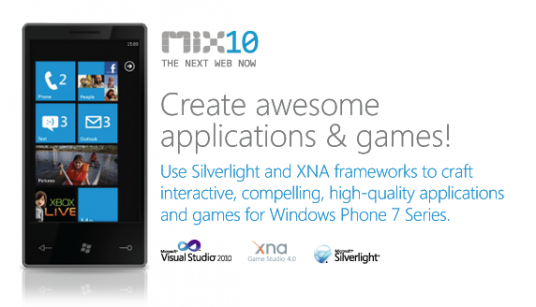 Today is the start of Microsoft’s MIX10 conference in Las Vegas, and there’s some good stuff coming down the Windows Phone 7 pipeline. First up, Microsoft has announced that they have made their Windows Phone 7 Developer Tools available for download through their MSDN download center. The tools will give eager devs a chance to get their feet wet with app development for the brand-spankin’ new mobile operating system from Microsoft.

Microsoft gave a couple quick demos at MIX10, showing off the click-and-drag simplicity of creating WP7 apps. And, to highlight the ease of developing for the WP7 platform, Microsoft showcased apps like the eBay app that took something like eight weeks to go from sketch to fully working code by using Silverlight to develop an out-of-browser app for WP7. The app proved that, with the right tools, devs can push out WP7 apps with very little time investment to Windows Phones around the world.

Microsoft also confirmed, again, that every Windows Phone powered by WP7 will be a Zune handset. That means all the musical prowess of the Zune music player will be integrated into the platform, giving users a familiar interface in the Zune music hub.

Three "important" people are going to have to go to their local office supply store and pick up some new...