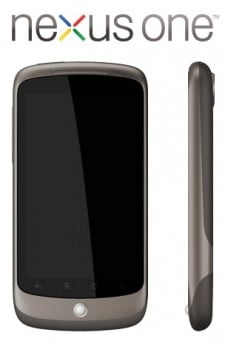 The rumors were true. Sprint has just contacted us to let us know that the much-ballyhooed, but rarely purchased Google Nexus One has just been confirmed for the Big Yellow network! With T-Mobile and Verizon partnered up for Nexus One-love since the get-go, AT&T recently confirmed to be grabbing the Android 2.1-powered smartphone, this news that Sprint will soon offer the N1 essentially completes Google’s US carrier quad-play. Google’s going to have the American wireless landscape locked down in the near future.

Seeing as how Verizon Wireless’s Nexus One uses a wireless technology compatible with Sprint’s 3G network, it makes sense that Google would bring the N1 to America’s other CDMA network. Sprint’s smartphone portfolio has been uninspired as of late, and they could really use a Google-fied shot in the arm. We’re not told how much the Sprint N1 will cost, or when it will become available, but those details are less important than the actual confirmation that the struggling US carrier will finally have a high-end Android smartphone worthy of its logo.

The Sprint Nexus One will be sold exclusively through Google’s online store. Interested customers will have to buy their Yellow-branded N1 through the google.com/phone portal, as none of Sprint’s retail channels will offer the Nexus One.

“While a pricing plan has not yet been determined for Nexus One, we are confident that it will be consistent with Sprint’s commitment to deliver more value than our competitors and keep pricing simple,” according to Fared Adib, Sprint vice president of product development. The current pricing model for the T-Mobile and Verizon Nexus One gives us a good idea of what to expect with Sprint’s variant. We’ll likely see a subsidized and unlocked version of the N1 hitting Sprint with roughly $530 and $180 price tags, respectively.

Stay tuned, we’ll bring you more news on the Sprint N1 as we hear about it!

It wasn't too long since Samsung announced the Jet 2, which looked exactly like the original. Well, Samsung's at it...