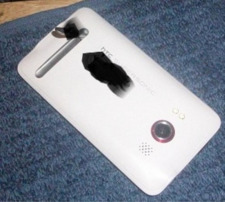 Credible reports are swirling that Sprint will unveil its first 4G smartphone at next week’s CTIA conference. Will we finally get to see the HTC Supersonic?

Sprint CEO Dan Hesse will be giving a keynote speech at CTIA next Tuesday, and those “people familiar with the matter” told The Wall Street Journal that WiMax and a 4G handset will play a major role in the presentation. This makes a ton of sense because Sprint has previously said it would bring a 4G handset out this summer and it’s pimping WiMax/4G in multiple TV ads. The leaks are most likely Sprint people trying to drum up advanced interest. Well, it sure as hell worked on me.

The HTC Supersonic, or some variation of it, will probably be unveiled and it’s a beauty. This relatively slim handset is expected to rock a 4.3-inch AMOLED touch display, 1GHz Snapdragon, run Android 2.1 with Sense and have a 5-megapixel camera. The features are all good, but the drool-worthy part is being the first on the block to 4G data on your phone. The company has already released the 4G/3G Overdrive hotspot and this thing can get over 10 Mbps in the right spots – it averages 3 to 6 Mbps in most 4G zones. Having that kind of speed on a cool-looking HTC phone is more than enough to get me to break my contract with Verizon, now if only WiMax could come to San Francisco sooner.

The move would be a nice feather in Sprint’s cap because it would be the first U.S. carrier with a 4G handset and it should have that distinction for almost a year. Verizon is rapidly pushing its 4G network – based on Long-Term Evolution technology – and Big Red is expected to have 4G smartphones by the middle of 2011. We’re going to have a brigade of IntoMobile staff at CTIA, so keep it tuned for more Supersonic news, impressions, pictures, videos and a whole lot more. Check out this teaser video for now:

[Via Phonescoop, The Wall Street Journal]

Well, we called it. If you're on T-Mobile, or are just a fan of MotoBlur, you can get the Cliq...