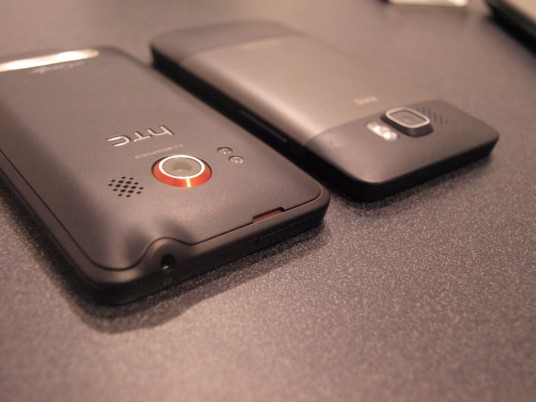 With everyone (ourselves included) hemming and hawing about how the HTC EVO 4G improved on the HTC HD2 with a dash of 4G WiMAX and a sprinkle of 8-megapixels on the camera, it only makes sense that we show you what the two media-savvy smartphones look like side-by-side. What you see here are the T-Mobile HTC HD2 lined up next to the Sprint HTC EVO 4G (Supersonic). The differences between the two devices are slight, but they sure do make a lot of difference.

Here’s what you’re seeing in the photos. The EVO 4G is slightly thicker than the HD2 – thanks to the extra 4G WiMAX and HDMI-port hardware within the EVO. The battery is the same size in both phones. The EVO sports a snappier 8-megapixel camera that doesn’t show any noticeable shutter lag and boasts a refined camera control interface that makes the HD2’s already impressive camera look a little dated. You’ll also notice the EVO red-colored battery compartment that lies hiding from view until you’re ready to show off the goods. We call it cellphone “lingerie.” The headphone jack has also moved from the bottom of the HD2 to the top of the EVO. Oh, and you can’t forget the EVO’s kickstand.

All in all, the subtle differences make a big difference when considering the whole package. So, which handset would you choose? Does having a swappable SIM card in the HD2 mean enough to keep you from switching to Sprint for the EVO 4G?

As promised, today Verizon Wireless and Skype announced Skype Mobile, an application that allows customers to call any of the...