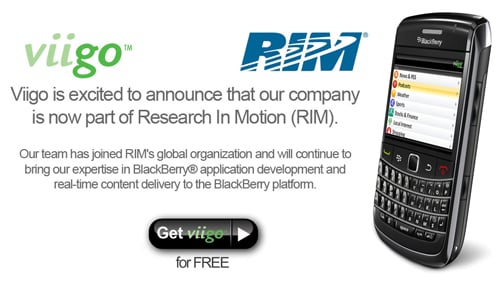 BlackBerry-maker Research In Motion has officially acquired app developer Viigo, who we’ve looked at more than once. Viigo has been an immensely popular application that began as an RSS reader, and branched off into a variety of categories, such as weather, stocks, shopping, movies, sports, and all kinds of serialized information. In short, Viigo could often get you the information that you just couldn’t bring yourself to launch the browser to find. The Google Reader integration has made the app my single point of news on BlackBerry for at least a couple of years.

So, why the acquisition? Part of me thinks it was money. Viigo’s business model never really had much oomph to it – there’s no way mobile ads would provide significant revenue, and there are only a few circumstances where I could see Viigo’s enterprise-grade product plug in anywhere. There have been a few carrier preload deals which certainly shows promise, which was clearly enough for RIM to want to buy up Viigo. It’s worth noting that Viigo’s founder and CTO, Jay Steele, also headed up Plazmic a few years ago, which was also acquired by RIM to power BlackBerry themes. Viigo has always had a significant amount of polish and native integration to it that made me think that an acquisition was the plan all along, but it’s really hard to speculate at this point. Chalk is the last significant RIM acquisition within recent memory, and the biggest song and dance ever made about that was BES integration. With any luck, Viigo as a product will be able to continue to exist relatively independently, however, having seen the odd Nerf gun in their Toronto office, and having a good idea about the bureaucracy Research In Motion maintains, there may be some significant management changes that folks might not be too happy about.

You can find out more about Viigo here.

RIM has announced the new BlackBerry Beta Zone, which is a dedicated area for testers to try out bleeding edge...