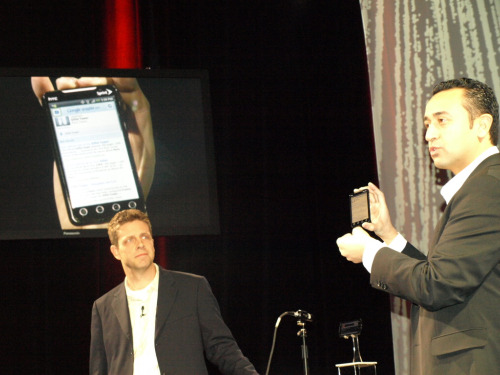 The IntoMobile team spent last week destroying Las Vegas for the CTIA Wireless 2010 tradeshow. Despite having no luck at the blackjack tables, we were able to fully cover the most important conference for the U.S. mobile industry. Read beyond the jump for a thorough take on the big hits and misses from Sin City.

Google’s mobile operating system had a strong showing at last month’s Mobile World Congress, but there was no doubt Android was the star of the show at CTIA 2010. The WiMax-packing EVO 4G was the hottest handset at the show and, of course, it was running the latest version of Android. This beast is packing a 4.3-inch capacitive screen, 8-megapixel camera, 1.3-megapixel front-facing camera, 1 Ghz Snapdragon, HDMI-out, WiFi, GPS, and all the goodies you expect from a high-end smartphone. This gives Sprint the bragging rights to have the first 4G smartphone and, even without WiMax, this device would probably still be at the top of the smartphone heap. This could move the needle for the struggling carrier, as this editor is strongly considering breaking his contract with Verizon to grab the EVO 4G once WiMax hits my area.

The Samsung Galaxy S would have been in the running for best handset in show if not for the EVO 4G, and it also used Google’s mobile OS. It packs some solid specs and a supremely gorgeous screen (photos don’t really do it justice) but I’m not the biggest fan of Samsung’s feature-phone-like user interface.

Motorola brought Android to the rugged space, as the military-tough i1 is resistent to dust, waterproof, and is the first Android phone that can utilize the iDen network for push-to-talk. We had a chance to speak with Dirty Jobs’ Mike Rowe, and he said the device is perfect for his rough-and-tumble lifestyle.

It’s not just the big boys though, as Dell is making a push for the consumer smartphone space with the Android-powered Aero. Kyocera re-entered the smartphone game with the Zio and the budget-minded Android device will be hitting Cricket by the end of the year for less than $250 without a contract. The Zio, which isn’t half bad actually, really seems to fulfill the promise of Android: manufacturers taking the royalty-free OS down market and bringing smartphones to the masses.

It’s not just roses for Android though, as the Wild West nature of it is also leading to multiple concerns about fragmentation. The Zio and Aero aren’t launching with the most current version of Android and, while these will be upgradable, it could lead to some confusion for developers and end users. As insane as it is to say, the pace of innovation may be too fast – Android users know that any phone you purchases will be surpassed in six months and maybe with a version of the OS that you won’t be able to get. Of course, this concern is always going to happen in the tech space and we can take some assurances from the fact that even the Android devices that aren’t the latest and greatest can still provide a solid user experience.

My network’s faster than yours

A good old-fashioned pissing match broke out among the carriers, as T-Mobile, Sprint, Verizon and AT&T boasted about the speeds and ubiquity of its networks. Sprint’s WiMax network received a flagship handset, and the third-largest carrier said it would be expanding its 4G network to multiple major metropolitan cities by the end of the year.

Long the laggard in the mobile data space, T-Mobile came out swinging by saying it would be covering its more than 185 million customers with its HSPA+ network. This “3.75G” network has a theoretical limit of 21 Mbps and T-Mobile adamantly said it will have the fastest mobile data network for the next few years. This may not be marketing puffery because Sprint’s WiMax can deliver 10 Mbps on the go and Verizon’s upcoming Long Term Evolution network has been providing roughly 12 Mbps download speed. Of course, you could be like Stefan and think the push for 4G is nothing more than marketing bullshit.

Speaking of Verizon, it was relatively quiet show for the nation’s largest provider. Sure, there was the Skype Mobile announcement (download it, it’s pretty good), but there weren’t many new details about its LTE rollout and we didn’t even get an official Verizon Nexus One announcement.

AT&T had little to say about its next-generation mobile network because it was focusing on bringing data to a variety of devices. Because of its GSM nature, the company may be the most well-positioned to provide mobile data services for things like electronic-readers and tablets. But AT&T is looking beyond just the obvious devices, as it showed off connected dog collars, medicine containers, and other emerging devices. The company thinks this category could have the largest growth potential.

What we didn’t see

We had more opportunities to play with Microsoft’s Windows Phone 7 Series and I’m still excited about it, but I was hoping we’d hear some more about its Project Pink phones. I don’t think these devices will be highly significant but once these are out of the way, Microsoft can fully focus on WP7S.

Even though we saw cool things like Yahoo’s Sketch-A-Search, I wasn’t blown away by the applications we saw. There wasn’t anything too innovative and far too many in-car programs.

It was a busy show but not overwhelming. Our editor-in-chief Will Park said he’s noticed a trend where companies stop trying to deluge us with handsets at shows and instead focus on fewer devices. This makes a lot of sense because there’s only so much coverage that can happen during these shows. For example, Research In Motion had a relatively quiet show because it is waiting for next month’s WES show, where it is expected to unveil the its sliding BlackBerry. This is a better approach, I believe, because it allows the stellar handsets and applications to shine, even if it’s only for a few weeks.

AT&T’s Palm Pixi Plus gets approved by the FCC

AT&T has officially announced the inclusion of the Palm Pixi Plus (alongside the Pre Plus) to its portfolio during this...