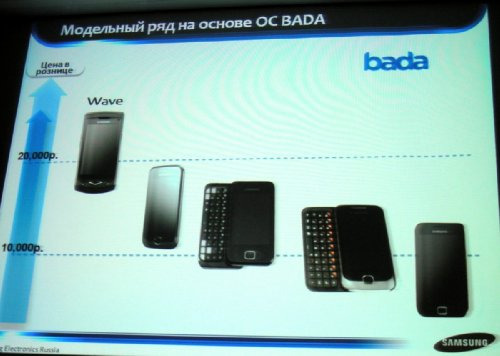 During its bada developer day, Samsung briefly showed off four future devices that will use its widget-tastic operating system.

Samsung didn’t give many details about the new devices other than they will be cheaper than the Wave and at least two of these will rock a slide-out QWERTY keyboard. The non-keyboard devices should be thinner than the Wave but may lack some of the features.

Does the world really need another smartphone OS? I’d lean towards no but Samsung is a major force in the industry (second-largest handset maker in the world) and it doesn’t want to be beholden to a third party for its OS. This definitely makes sense and it could help the company make lower-end smartphones for the masses, particularly in emerging markets. The widget-tastic nature doesn’t seem that appealing from afar but, as you can see from our hands-on video of the Wave below, this OS can produce an above average experience.

Apple on iPad sales: We moved 300,000 iPads on launch day, how do you like them Apples?

This past weekend, in case you somehow haven't heard, was Apple's iPad launch weekend. It was the weekend that Apple...