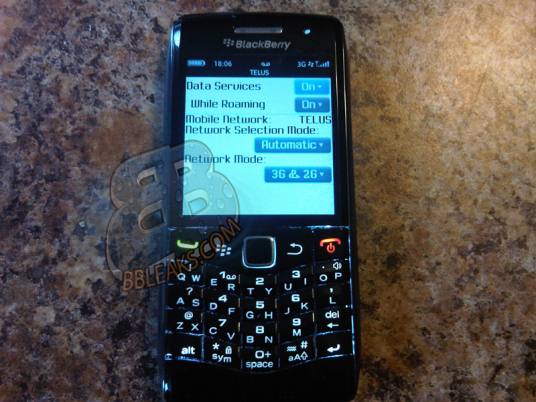 The refreshed BlackBerry Pearl 9100 is looking more and more real every day, now with some fresh shots of one of those test devices running on the Telus network. Code-named the Stratus, we haven’t heard much in the way of carrier support in the U.S., though Fido (and presumably Rogers) will also be getting the BlackBerry 9100.

The 9100 will be a significant update to the old Pearl, which was the first BlackBerry to introduce trackball input. A 3.2 megapixel camera, 256 MB of app memory, OS 5.0, optical trackpad, and a 360 x 400 display will all be brand new to this BlackBerry family. Now, we’re still not sure how the T9 BlackBerry Striker 9105 variant will be deployed (either with Telus, or with the same price point, or what), but it seems likely that it will be launched in tandem with the BlackBerry Pearl 9100.

And hey, what about the full QWERTY keyboard that was supposedly going to be for the 9100? I’m curious to see if that’s still going to happen, mostly because it would be a neat experiment to see what would happen when one core phone model had all three different kinds of real (nonvirtual) keyboards available to it.

Odds are good that the BlackBerry Pearl 9100 will be announced in a few short weeks at WES, so stay tuned.

Kik, the guys who were working on an especially promising music application for BlackBerry, have switched gears and launched something...