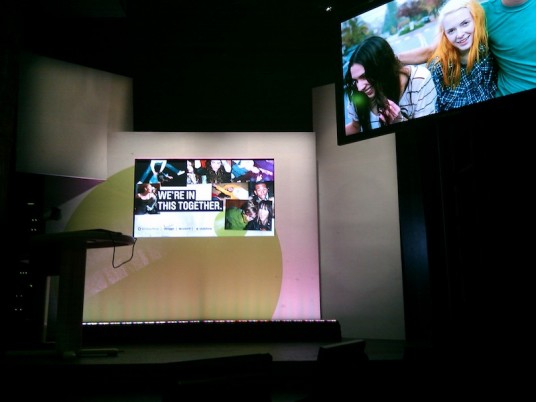 Microsoft just went officially official with their consumer-oriented Pink phones, but Microsoft threw us all a curve ball by changing up the branding from the expected “Pink” to “Kin.” From here on in, Microsoft will refer to their consumer lineup of phones as the Kin phones. The one thing that hasn’t changed are the two form-factors we’ve been seeing for months now. The smaller handset, previously known as the “Pink Turtle” is now known as the Kin 1. The larger version is the Kin 2. Simple right? Right. They’re both sliders with QWERTY keyboards. And, That’s the whole point with “Kin” – keep it simple enough for the masses to use, but build in enough functionality to make the phones useful enough to keep you connected to your network of friends. 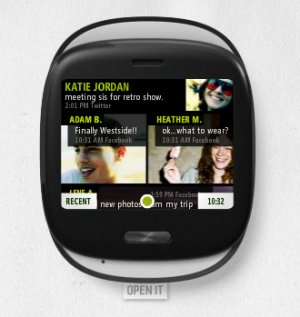 There’s no official name for the operating system that powers the Kin phones. The homescreen is divided into different panes. The Main homescreen is called “Loop” – it’s a sort of real-time stream of all your news feeds, social network updates (Myspace, Facebook, Windows Live), friends’ updates, emails, text messages. Swipe the screen to the left and you’ll see a menu that offers quick access to things like Messaging, Email, Web Browser, Camera and the like. Swipe to the right of the Loop homescreen, and you’ll see your list of favorite people – these are the people that Loop will monitor for status updates.

The Kin 1 is the lower-end of the two Kin phones. It features a slide-out QWERTY keyboard. It’s compact, but packs in a 5-megapixel camera (with flash), and shoots video in SD resolution. It holds 4GB of photos and videos and has access to the Zune music store.

The Kin 2 is the larger, higher-end Kin phone. It features a larger, slide-out QWERTY keyboard. It’s got the bigger screen, 8GB of onboard storage, and an 8-megapixel camera capable of shooting HD video in 720p resolution. 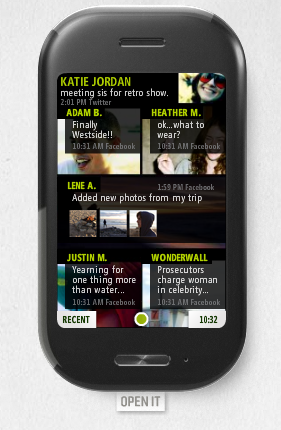 Both phones are designed to help you stay connected with your network of friends. There’s a new “Spot” feature (the little white circle centered along the bottom of your display) that’s aimed at helping you share content with your friends. Simply drag content (web pages, photos, videos, etc.) onto the Spot and then drag the friends you’d like to share it with. You can send the content over SMS messaging or email.

Photos and videos are automatically geo-tagged with location data and uploaded to Microsoft’s new “Kin Studio” cloud-based interface. You can access all your media in the timeline-based UI from any desktop web browser. The automatic uploads ensure that your photos are always saved to the cloud, and also saves space on the phone itself.

Kin isn’t a smartphone. It’s a featurephone with social features. As such, it lacks any sort of app store integration. You don’t get instant messaging. You don’t even get a calendar features. If you need that stuff, look to Windows Phone 7. If you really don’t care about productivity, then Microsoft wants you to use Kin.

The takeaway here is that Kin is socially-connected and aimed at those people that value their friends and want to give them updates whenever and wherever possible.

So, we're live from the Microsoft event but all the information on the "Project Pink" devices is already official. It's...