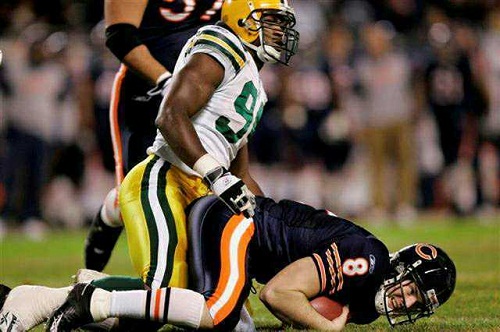 Just a reminder that, as promised, the NFL Mobile app is now available for Verizon Wireless smartphone users.

The free app is available for 13 3G handsets including the Droid and Droid Eris, and it offers news headlines, scores and video content. I downloaded it for my Droid and it’s focused on the upcoming NFL draft. You can get in-depth reports, scout’s analysis on prospects and videos with a few taps of your finger. I think it’s a pretty well done app but the videos had a tendency to get disconnected. When it’s working, the quality of video is about as good as you can expect. Search for it in the Android Market, or you platform’s respective app store.

The exclusive rights to NFL Mobile reportedly cost Big Red $720 million. The football service had been on Sprint beforehand but the third-largest U.S. carrier didn’t feel it was getting an adequate return on investment. Fear not Sprint sports fans, as the company recently inked a deal to grab ESPN Mobile. While I don’t think sports is enough to move the needle for many cellular customers, it is a nice additional feature to have.

NBC, Fox and 10 other major broadcasters are teaming up to create a joint venture that will bring nationwide television...