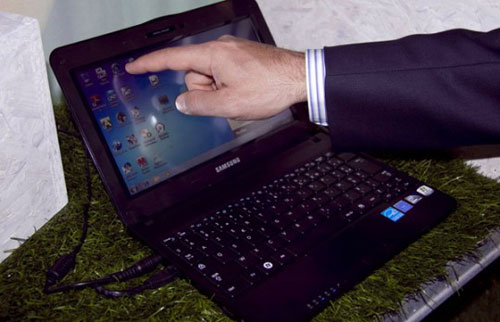 Again, not exactly the “pure” mobile news, but somewhat related nonetheless — if we’re going to cover the Apple iPad, we should also give some space to netbooks. This is especially true if they boast a touchscreen and in some way compete with Apple’s tablet.

Samsung NB30 is exactly such a device, rocking a 10.1-inch 1024×600 pixels touchscreen display and Windows 7. Intel’s Atom N450 1.66GHz CPU provides all the power needed, though I doubt you’ll be able to use this netbook like your regular laptop. Rest of the specs include 1GB of RAM, 160 of 250 GB hard drive, integrated graphics, WiFi, Bluetooth and a webcam.

In a nutshell, it’s a touchscreen-equipped version of the existing NB30 model.

The price is set at 399 EUR (about $544) and we’ve no doubts Samsung is already negotiating with carriers all around the world to offer its baby to their subscribers. Usually, the idea is to subsidize the NB30 and bundle it with some data plan. We’ll see how that goes…

I just got a mini stat-attack in from my bud Ron at e-reader-info.com: DisplaySearch say that shipments of e-paper increased...