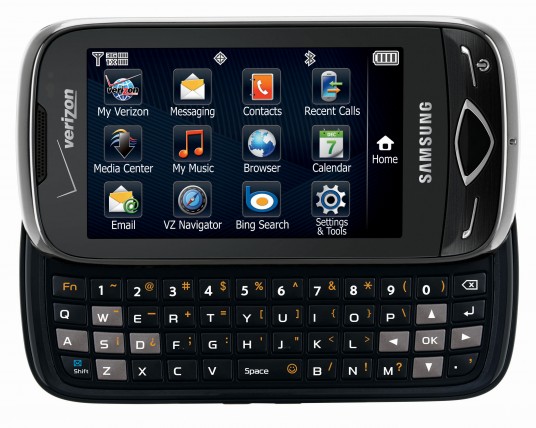 As expected, the Samsung Reality U820 will be coming to Verizon on April 22 for $79.99 on conctract.  The landscape slider is built from the ground up for people who want plain and simple texting and instant messaging, along with all of the appropriate social networking apps. The specs are modest: 240 x 400 touch display, 3.2 megapixel camera, microSD memory card slot, and will be available in both black and red paint jobs. The keyboard looks strikingly similar to the Moment 2, which promises to be a notably smarter device coming to Sprint in the near future. The Reality will likely shoulder out the Rogue, which had bumped out the Glyde as Samsung’s touchscreen/QWERTY combo device for Verizon.

Keep an eye on Verizon’s online store to see when the Samsung Reality is available for purchace.

My buds over at CrackBerry received a nifty little tip just the other day regarding the BlackBerry Bold 9650... on...