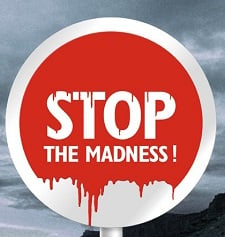 Bill Jordan of Aurora, Colo. was probably a happy little clam with his brand new iPad but little did he know that the magical tablet would lead to some horrific events.

Jordan was leaving a mall with his iPad in tow when some scumbag attacked him in a parking garage trying to take the device. Unfortunately, the iPad was in a bag tied to his hand. The thief continued to pull at the bag and tore off a piece of Jordan’s frigging finger. Part of his left pinky finger had to be amputated. Yikes.

“I saw just a bone, all the skin and tendons and everything were off,” Jordan told a local TV station. “I hope you understand what you’ve done to my life and my family’s life for a simple piece of apparatus that’ll be junk in a couple of years.”

Do yourself a favor Apple and hook this man up with free iPad/iPhones/iWhatevers for the rest of his life.