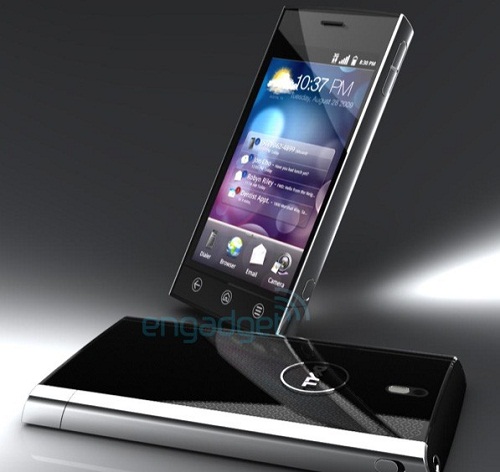 Hats off to the folks at Engadget, as they’ve dug up some hot Dell scoops (didn’t even pay $5,000 for them, either). First, we saw the Lightning with Windows Phone 7 Series and now we’re seeing the Android-powered Thunder.

The Thunder looks like a gorgeous full touch slate device with a 4.1-inch WVGA OLED screen. It’s due in the fourth quarter, so it’s a safe bet to say it will rock Android 2.2 (Froyo) and Dell will be throwing on its own custom user interface layer, known as “Stage.” This is supposed to be similar to Sense UI in that it ties social networking integration, calendar, and other features with some spiffy visuals. One of the cool things about the Thunder is that it’s supposed to have Flash 10.1 support with an “integrated web video Hulu app.” We all know Hulu’s toying with the idea of a mobile app and I’d bet it would be the subscription variety.

The other specs aren’t solid but it will probably have a 1 GHz processor, WiFi, GPS, AT&T 3G support, Bluetooth and an 8-megapixel camera. Looks like Dell’s taking this smartphone game seriously.

The MyTouch Slide, bound for T-Mobile at some point, has come from a seemingly low-end, ugly, me-too device, to a...