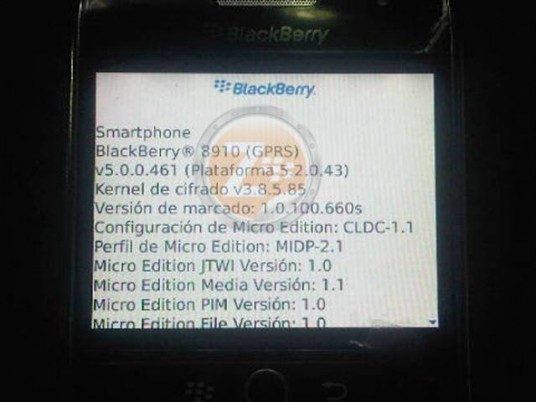 The first time we saw the BlackBerry Curve 8910, it was looking more or less complete, with a trackpad and the traditional-style keyboard. The form factor was even confirmed again at CES, but the specs were still fairly nebulous.  At the time, the code-named Atlas was supposed to be running on a speedier evolved EDGE wireless standard, and pack Wi-Fi b, g, and n, but these latest pictures of a live unit don’t show any sign of Wi-Fi and it’s using a trackball.

Now, it’s entirely likely that this is a preproduction unit made for testing, before Wi-Fi and the optical trackpad were put in. It seems really weird that RIM would put out a device with a trackball after they’ve been on a roll with the newew input on all of their latest smartphones. The lack of Wi-Fi would been even more terrible, given that the current emerging market flagship BlackBerry (Curve 8520) has Wi-Fi, unless, of course, RIM wanted to offer a non-Wi-Fi alternative that was just as cheap.

It’s hard to say where the BlackBerry 8910 stands right now, but with WES right around the corner, we’re going to be seeing at least one, if not multiple device announcements.

BlackBerry Theme Friday: ‘I Dream of 6’ Theme from Ryan Hamrick

A few days ago we all got a little look at the first BlackBerry OS 6.0 screenshots. While this is...