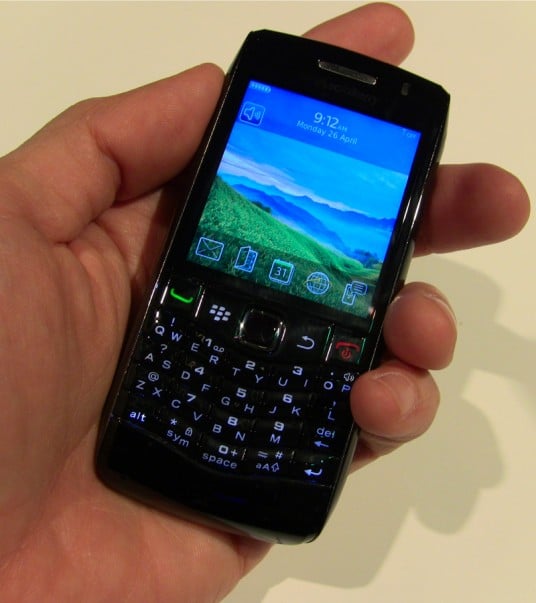 We’re at Research In Motion’s WES 2010 conference this week and that means we get the chance to fondle the latest BlackBerry smartphones. First up is a quick look at the Pearl 3G, which packs multiple features into a small package.

The next-generation Pearl feels pretty good in the hand, if a bit light. We prefer a bit more heft in our devices but the Pearl is obviously aimed at a different demographic. I really appreciate the music controls at the top of the device and the 360 x 400 pixel screen was bright and clear enough to not be a drag. The 624-MHz processor provided a relatively zippy experience but we’ll see how that holds up once you’ve loaded it with applications.

The handset will be the first BlackBerry to offer support for the 802.11n WiFi standard, which should mean you can surf the web at high speeds (too bad the new browser is not out yet). As the name implies, this Pearl will have UMTS/HSDPA 3G support, as well as work on quad-band GSM/EDGE carriers.

The handset will come in two hardware configurations: the 9100 has the 20-key SureType keyboard Pearl fans are used to while the 9105 sports a 14-key alphanumeric keyboard. The 14-key version wasn’t as bad as I thought it would be but I’m just too far removed from those days to try and go back. It’s an interesting play though, as there are plenty of people around the world who are interested in a t9-like experience.

Regardless of which keyboard you choose, you’ll get a 3.2-megapixel camera capable of zoom, auto-focus and video recording. There will also be GPS, Bluetooth, standard headset jack, and a microSD slot expandable to 32 GB. Of course, you’ll get the messaging prowess that a RIM device is known for and you’re not going to be shelling out much – the handset is hitting carriers for as low as $30 with a new contract.