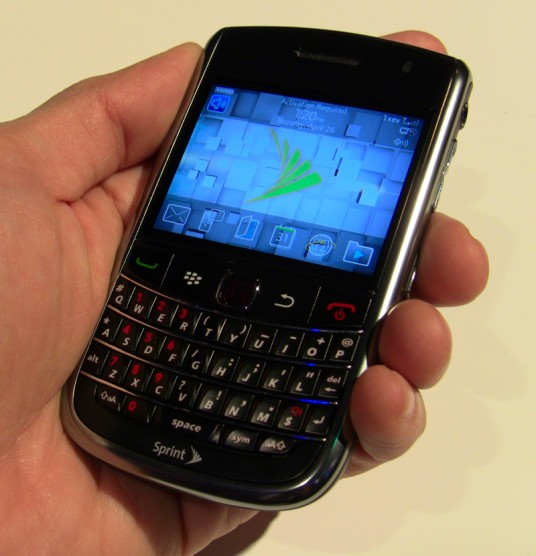 RIM just announced their latest BlackBerry smartphone, the BlackBerry Bold 9650, and we’ve gone hands-on with the handset at WES 2010. The new Bold 9650 is the first BlackBerry Bold for CDMA networks, like Sprint, and it’s packing all the high-end goodies that we’ve seen in the Bold 9700. There are some differences, though.

The Bold 9650 sports some upgraded hardware. Namely, the 512MB of RAM doubles that found in the BlackBerry Bold 9700, which makes for a lag-free experience. There’s also the CDMA radio that allows the Bold 9650 surf on Sprint’s wireless network in the US, pulling down 3G data on Big Yellow’s EVDO Rev. A network. The quad-band GSM radio ensures that this Bold will work with most carriers in almost every country on Planet Earth. Otherwise, the Bold 9650 is spec-for-spec a mirror image of the Bold 9700.

The hardware is classic BlackBerry. Fit and finish is top-notch, as is material quality – the textured battery cover is a nice touch. There’s a lot of plastic in used in the 9650’s design, but it doesn’t feel cheap. The weight of the device also lends to a high-quality feel befitting the Bold’s high-end status in the BlackBerry lineup.

The keyboard. What can we say? If you’ve ever used a Bold and it’s perfectly contoured, well-spaced, and impressively stylized QWERTY keyboard, you’ll know how good the Bold 9650’s keyboard is. The keys have a curved shape that makes it easy to type by feel alone, and are just the right size for fast and accurate typing. The metallic frets in-between rows adds to the Bold’s slick style. Key-presses are accompanied by a satisfying and confident click.

With double the RAM of the Bold 9700, the Bold 9650 is a speed-demon. You’ll get less lag when running multiple apps on the 9650 than you would with the Bold 9700 and its lesser 256MB of RAM. We didn’t have too much time to open random apps and play with the device, but initial hands-on impressions are that the extra memory helps move the BlackBerry OS that much faster.

We didn’t get to play with the camera as much as we’d have liked, but the 3.2-megapixel camera performed admirably. It’s no 8-megapixel shooter, like on the HTC Incredible, but it will get the job done. And, with an LED flash, you might be able to get away with a low-light shot or two when you’re in a pinch. Don’t expect too much from the camera and you’ll be fine.

One thing we should mention is that the 9650 is more like an updated BlackBerry Tour – it’s bigger than the Bold 9700, and sports a model number reserved for the Tour line – but RIM has decided to drop the Tour brand and consolidate their high-end hardware under the “Bold” brand. It’s a bit confusing for folks that are super familiar with RIM’s products, but for the mainstream consumer, the brand consolidation should make it easier to figure out which BlackBerry is right for them.

Expect to see the Sprint BlackBerry Bold 9650 hitting all Sprint retail channels on May 23, 2010. Pricing has yet to be announced.

We have confirmation from Sprint that the new-fangled BlackBerry Bold 9650 will hit the streets May 23 for $199 with...