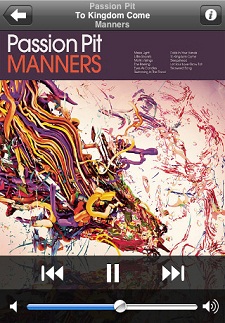 The Rhapsody 2.0 application for the iPhone that we’ve talked about before has been approved, and the music service is stepping it up a notch by enabling users to download tracks and listen even if they don’t have network connections.

The free app allows paying Rhapsody subscription users to stream more than nine million songs to their iPhone or iPod Touch over WiFi, 3G, and EDGE. The $10 monthly fee also now includes the ability to download those tracks and play them any time you want. The company also said it is chomping at the bit for the OS 4.0 software because this will enable it to play these tracks in the background.

The company also has plans for other platforms and devices, according to a blog post.

iPad: The new iPhone app works on the iPad, but because it isn’t optimized for the iPad UI, it may look fuzzy or pixelated. Rhapsody is planning to release an iPad-optimized app later this year when Apple releases multitasking capabilities for the iPhone OS later. That will also allow people to play Rhapsody music in the background while they’re doing other tasks, such as email, gaming, etc.
Android: If you’re using the Android app that came out this month, you’ll be happy to know we’ll launch downloadable songs in the next few months.
BlackBerry: We are actively developing a Rhapsody app for BlackBerry users with plans to launch it this summer.

Rhapsody is the first to offer this kind of service for the United States but its competitors are sharpening their knives. The much-heralded Spotify is still trying to make its way to the states, while MOG is preparing a competing service that will offer similar features for the same monthly price. I’m still not completely sold if these offer enough value for over $100 a year but it’s getting quite tempting.

PayPal has been working their iPhone app a lot lately, most recently including the ability to Bump to send money...