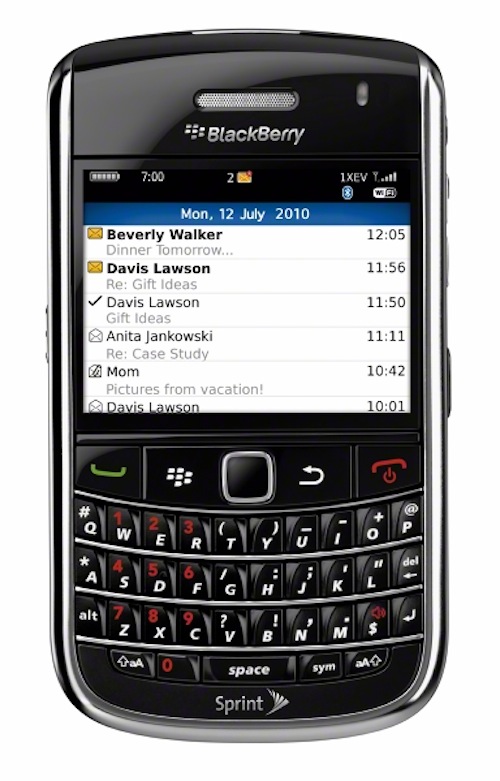 While GSM subscribers have been playing with the BlackBerry Bold for years, those of you on CDMA networks – like Sprint and Verizon – may have been feeling a bit ignored. Sure, you could get yourself a Bold-esque BlackBerry Tour from your favorite carrier, but true Bold-fiends aren’t going to be satisfied with a watered down version of the push-emailing handset. Well, today BlackBerry-maker Research In Motion (RIM) has finally seen to it that customers on CDMA carriers will be able to get their Bold fix in the near future. RIM has just announced the long-rumored BlackBerry Bold 9650 (codename: Essex, previously rumored as Tour2) as the first CDMA Bold, complete with WiFi, global-roaming capabilities, and a slightly upgraded spec-sheet.

The BlackBerry Bold 9650 is a lot like the the Bold 9700 (surprised?). The Bold 9650 sports the same class-leading physical QWERTY keyboard, 3.2-megapixel camera (with flash), 3G data connectivity, WiFi (b/g), integrated GPS, microSD card slot, bright VGA (480 x 360) display, Bluetooth 2.1, optical trackpad, and 3.5mm headphone jack as the Bold 9700. The difference between these two Bold smartphones lies in the cellular radios packed within. The new Bold 9650 manages to squeeze an additional CDMA radio into the stylishly slim package, giving it true global-roaming chops. That means this new Bold will happily pull down 3G data on CDMA EVDO Rev. A networks in the US, while still playing nice with 3G (HSPA/UMTS) networks overseas.

There’s also another critical difference between the 9700 and the 9650. As expected, the Bold 9650 boasts double the Flash memory of the Bold 9700. With 512MB of memory on tap for running applications and BlackBerry OS overhead, the Bold 9650 should be zippy and lag-free. You might even be able to get away with forgetting to close apps without having the phone get all lag-tastic on you.

Unfortunately, being a US CDMA device, the Bold 9650 won’t be able to handle simultaneous voice and data connections in The States. RIM is quick to point out that you can use the WiFi connection to handle data services while the CDMA radio does all the legwork on the voice call, but that really only makes sense when you’re sitting at home, at the office, or in a coffee shop with an available WiFi hotspot. Overseas, though, the Bold 9650 should have no problem ferrying data and voice calls over 3G networks that use HSPA and/or UMTS technology.

There’s no mention of whether or not this new CDMA Bold will be running BlackBerry OS 6.0 or the OS 5.0 that we’ve come to know and love accept in the 9700 Bold. We’ve already seen the 9650’s OS leaked and made available for download, so our money’s on the OS 5.0. It’s probably safe to assume that we’ll see an OS 6.0 update in the near future.

RIM says we should expect to see the BlackBerry Bold 9650 hitting US carriers around May 2010 – May 27, if rumors prove accurate – but stops short of mentioning specific carriers. We’re thinking both Verizon and Sprint are going to be picking up their own variants of the handset, but that’s another announcement for another time.

[Update]
Yup, it’s definitely coming to Sprint. We just got confirmation from Sprint that they will be offering this latest Bold in the coming weeks. We’re still looking at late May for Sprint’s BlackBerry Bold 9650 launch.

[Update2]
Sprint has confirmed a May 23 launch date for the BlackBerry Bold 9650. It will be available May 23 through all Sprint sales channels.

CDMA customers get a bold new choice with powerhouse 3G smartphone that offers premium features and performance together with popular keyboard and trackpad, as well as support for Wi-Fi and high-speed 3G networks around the world

The BlackBerry Bold 9650 smartphone supports 3G (EVDO) networks in North America and (HSPA/UMTS) abroad and has a full-QWERTY keyboard, optical trackpad and built-in Wi-Fi® (802.11 b/g), which makes it possible to talk on the phone while browsing the web or sending and receiving email. The BlackBerry Bold 9650 also includes 512 MB Flash memory and an expandable memory card slot that supports up to 32 GB microSDHC cards, with a 2 GB card included.

The BlackBerry Bold 9650 fuses form and function in a striking design and, in addition to providing premium phone and multimedia features, it of course delivers the industry’s leading mobile solution for email, messaging (IM, SMS, MMS) and social networking.

Other key features of the BlackBerry Bold 9650 smartphone include:

The BlackBerry Bold 9650 smartphone is expected to be available from carriers in the United States beginning in May.  For more information visit www.blackberry.com/bold.

Samsung is rolling out new versions of its highly popular Star S5230 handset in Germany. The first one is the...