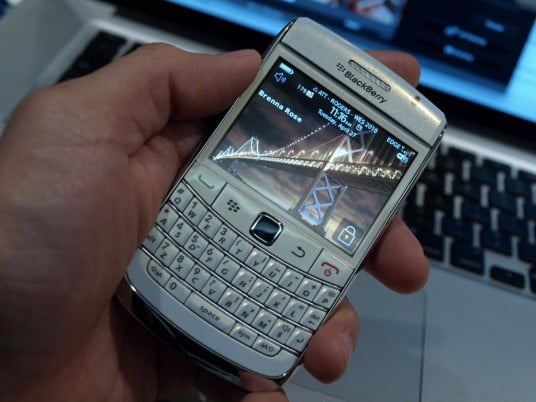 The White BlackBerry Bold 9700 was mentioned in RIM’s WES 2010 keynote earlier today as the new “Stylish White Bold 9700.” It’s just a color variant of the venerable BlackBerry Bold 9700, but the elegant white color scheme really makes the handset stand out in a sea of drab-colored smartphones. It’s going to be a few weeks before we see the White Bold 9700 hitting US shores, but seeing as how we have boots on the ground at WES 2010, we managed to sniff out a pre-production unit and play with it for a bit!

There really isn’t anything new to the White 9700. Like we said, it’s just a color-variant of the original. But, that doesn’t take away from the fact that this latest Bold is RIM’s flagship QWERTY BlackBerry phone. It packs a 2.44-inch HVGA display, 3.2-megapixel camera (with flash), 3G data connectivity, WiFi, GPS, Bluetooth 2.1, optical trackpad and a microSD card slot. It’s trimmed in chrome and sports dedicated hardware buttons for muting the ringer and locking the display. And, of course, the White Bold 9700 features the undeniably usable QWERTY keyboard that has become virtually legendary in the mobile space – the keys are contoured and spaced apart in just the right fashion to make no-look typing a breeze. We especially like the metallic chrome “frets” inlaid between the keyboard’s four rows of keys.

As for pricing and availability, we’re still pretty much in the dark about that. RIM tells us that the White Bold 9700 should be coming to the US market sometime in the next few weeks. Rumors have it hitting T-Mobile in a couple weeks. We’d put money on it being offered at the same $199.99 on-contract pricing as the already available BlackBerry Bold 9700 in not-White.

We're here at the Research In Motion WES conference and some of the more colorful conversation includes the idea that...