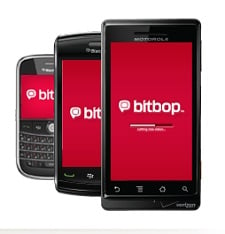 We’re here at Research In Motion’s WES 2010 and one of my favorite things is discovering a little app that could have a big impact on your lives. I think we found a winner with the Bitbop app, which enables you to stream or download TV shows and movies to your BlackBerry smartphone using 3G or WiFi data connections.

You can think of it as Hulu, but with no ads, and you have to pay $10 a month for it. The app is made by Fox Mobile group, but it will include popular programming from other providers, including 30 Rock and The Office. The video looks pretty good and it will tweak the resolution depending on what type of bandwidth you have. The slower your connection, the lower the video resolution – which makes sense, because you don’t want to wait forever to buffer a higher-resolution stream when on 3G. You can also download shows for offline access. There’s also an online way to manage your viewing queue a la Netflix.

Would I pay $10 a month to watch these videos on my handset? Probably not, but I’m a moribund blogger who is generally near a television or laptop. If you’re a heavy business traveler, I could see this being incredibly useful as a way to stay sane at airports and on planes. For enterprise users, the $10 per month subscription fee is probably negligible compared to the benefit of not going crazy waiting for flights and having to deal with delays. Being able to watch TV shows or movies from virtually anywhere should help a lot.

The service will launch this spring on the BlackBerry with an Android version expected to roll out soon. Sign up for the beta here and let us know what you think. We should be kicking the tires on this in a little bit, so stay tuned for a deeper look.

There was some ambiguity about this morning's patent agreement between HTC and Microsoft because it pertained to some Android phones....