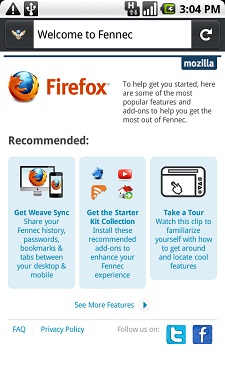 There’s a version of Mozilla’s Fennec available for Android, but don’t get your hopes up too high yet because it’s a “pre-alpha” build that is riddled with bugs.

I downloaded it for my Droid and absolutely can’t get it to launch at all. A colleague across the table also downloaded it for the Droid Incredible and it looks sharp, but has a lot of expected hiccups. It handles full HTML really well, but there’s no Flash support. You can swipe through the tabs in a very intuitive way and there’s even an add-on, or extension, available to play with.

But be warned, friends, this is a super-early build, and the Mozilla team has a boatload of warnings:

* We’ve only really tested this on the Motorola Droid and the Nexus One.
* It will likely not eat your phone, but bugs might cause your phone to stop responding, requiring a reboot.
* Memory usage of this build isn’t great — in many ways it’s a debug build, and we haven’t really done a lot of optimization yet. This could cause some problems with large pages, especially on low memory devices like the Droid.
* You’ll see the app exit and relaunch on first start, as well as on add-on installs; this is a quirk of our install process, and we’re working to get rid of it.
* You can’t open links from other apps using Fennec; we should have this for the next build.
* This build requires Android 2.0 or above, and likely an OpenGL ES 2.0 capable device.
* Edit: This build must be installed to internal memory, not to a SD card.

No real word on when to expect a beta version or a full version (Mozilla always seems to miss their deadlines) but it hopefully won’t be too long until we can take that little fox out for a spin.

[Via Mozilla, hat tip to PhoneScoop]