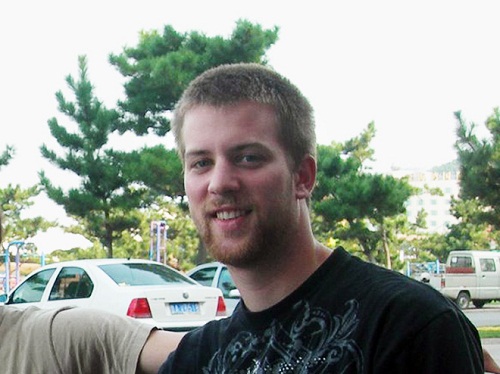 That guy with the douche-bag beard is reportedly the person who found the next-generation iPhone in a bar and sold it to an online publication.

The 21-year-old Brian J. Hogan, of Redwood City, California, said he was paid by Gizmodo but didn’t think he was doing anything wrong because he thought he was just selling the rights to review the unit before returning it to Apple. The publication told him there was nothing illegal with this process.

“He regrets his mistake in not doing more to return the phone,” said Jeffrey Bornstein, Hogan’s legal representation, in a prepared statement. “Even though he did obtain some compensation from Gizmodo, Brian thought that it was so that they could review the phone.”

According to his lawyer, Hogan was handed the phone at a bar and asked if it belonged to him. Like a jerk, he immediately started monkeyed with the device, leading to him seeing the Facebook page of the Apple employee who lost it. The handset was then powered off and, after asking around at the bar, he took it home with him.

This story is full of so many freaking holes. The most reasonable thing to do if you found a phone at the bar is to leave it with the bartender, but Hogan didn’t do this, according to the bar owner. He was probably thinking that he just found a new iPhone that he could keep or flip online for a few hundred bucks. That’s a scumbag move but he wouldn’t be the first to sell a “found” phone. A friend called Apple Care to try and return it, but that didn’t work. So, the “friend” went to multiple publications seeking payment for access to the device. When he discovered what he had there, I believe he just got very greedy and didn’t think through the consequences of selling it.

Hogan has been contacted by the police and has yet to be charged for a crime. In a spooky gesture, Apple’s security team reportedly visited his house in order to search for the prototype handset but they were rebuffed by Hogan’s roommate.

I’ve said it before: Gizmodo’s story is very convenient but it doesn’t really pass the smell test. Apple said it was stolen, not “misplaced.” The police are merely investigating to see if there was a felony committed. I could quibble with the methods of investigation but have no problem seeing the legal process play out.

AlertMe has launched a free iPhone app called EnergyMap, providing users with a breakdown of average energy spend a year...