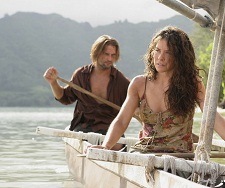 It looks like ABC is preparing a version of its cool streaming video app for the iPad 3G, so you’ll soon be able to watch Lost on the go.

According to the Business Insider, the reason the program hasn’t been available for the 3G version of the tablet is due to business and technical limitations. The content business is full of Byzantine licensing processes – the 3G version is considered the “mobile” variation while the WiFi is a separate license, even if it’s on the same device! Crazy stuff, I know, but ABC has apparently sorted this out and has already submitted the “mobile” version to Apple for approval.

If you’ve yet to check out the program in person, click on the embedded video below. The user interface is very polished and smooth and you’ll have access to a wide variety of shows. The video quality on the WiFi-only variation is pretty good but it’s unclear if the 3G one will have a lower bit rate. Knowing how crappy AT&T’s network can be, I wouldn’t be surprised if that’s the case. On the negative side, it doesn’t offer you the entire collection of shows and shows are not always ordered in chronological order.

[Via Business Insider, photo via ABC]

World of Warcraft Running On the iPad… Kind Of…

To the millions of subscribers of World of Warcraft, one thing I'm sure they'd all love to be able to...