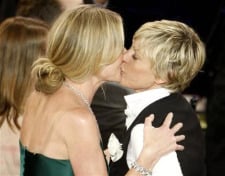 Apple seems to have a huge stick up its backside because it apparently gave Ellen DeGeneres a talking to about a comedic bit she did using the touchscreen handset.

The talk show host produced a rather unfunny, Apple-style ad where it seemed like the iPhone was difficult to use. Actually, the bit was more of a joke on Ellen and her lack of technological knowhow. Of course, Apple can dish it out during the Mac vs. PC ads, but it can’t seem to take even the slightest of ribbings.
Ellen said she was contacted by the company and she apologized on the air.

This is just the latest overreaction from Apple and I don’t see why there was any need to do this. I know Ellen has some sway with her audience but that same audience clearly understands this was a joke. Maybe Jon Stewart was right and the company is quickly becoming appholes.

Fans of Booyah's MyTown iPhone app have much to be excited today as an update was just rolled out today...