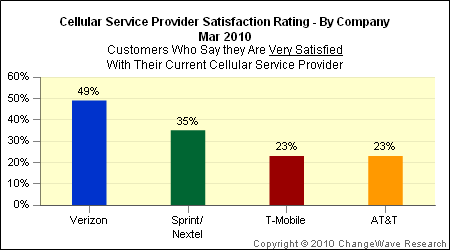 There are those that love AT&T, and there are those that hate AT&T. But, there’s no denying that the leading GSM wireless carrier offers some fairly significant advantages over its competitors. You get to use 3G data alongside voice services – so you can look up the restaurant location and reviews while chatting with your friend about where to go for dinner. You get the benefit of a 3G data network that pushes wireless data at speeds that would make other carriers with similar coverage footprints jealous. You can swap your SIM card into any compatible GSM phone on a whim. Unfortunately, you also get 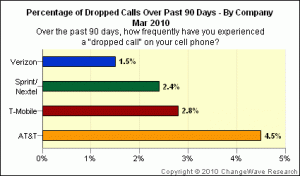 arguably crappy service. A new study from ChangeWave Research highlights that problem with stats that have AT&T scoring highest in customer-reported dropped calls. AT&T also fared badly in terms of the number of customers reporting that they’re “very satisfied” with their wireless service.

The stats are interesting, mostly because they seemingly contradict other reports that have AT&T’s network making huge strides in improving reliability and service quality. Big Blue has been on an advertising blitz to try and repair the damage done to its reputation with all the negative press about the US fleet of iPhones hammering the AT&T 3G network into submission. The company has been fighting consumer backlash as well as advertising smear campaigns from the likes of Verizon Wireless, the largest US wireless carrier (by subscriber count) and AT&T’s biggest rival. 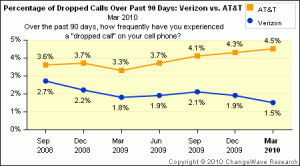 Overall, VZW tops the charts in ChangeWave’s survey. The carrier comes in at the #1 spot for least amount of dropped calls (1.5%) and the highest proportion of customers (49%) indicating that they’re “very satisfied” with the service. Sprint ranks second best with just 2.4% of all calls reported as dropped and 35% of customers reporting high satisfaction. T-Mobile comes in third with 2.8% of calls dropped and ties with AT&T for customer satisfaction with 23% of customers saying they are “very satisfied” with both T-Mobile and AT&T. 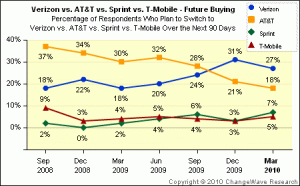 The data should be taken with a grain of salt, as they seem to contradict other reports and surveys that show AT&T improving network reliability and T-Mobile taking top-billing in customer satisfaction.

Clearwire said Wednesday it would be bringing its WiMax-based 4G to multiple more cities this summer but many people in...