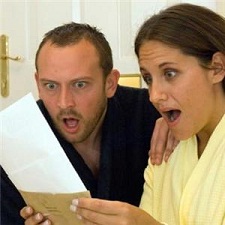 The Federal Communications Commission is trying to do consumers a solid by tackling the issue of “bill shock” – opening up your cell phone bill and being hit with extra fees because you went over your monthly allotment of voice, text or data.

In a public note (PDF), the governmental agency is seeking comment on how feasible it would be to implement a system that is similar to that of the European Union. In the EU, regulations require the carriers to notify users via a free text message when they have reached 80% of their allotted roaming data limit. When users hit their cap, carriers have to send out another message notifying the user of the costs.

In this public notice we seek to gather information on the feasibility of instituting usage alerts and cut-off mechanisms similar to those required under the EU regulations that would provide wireless voice, text, and data consumers in the United States a way to monitor, on a real-time basis, their usage of a wireless communications service, as well as the various charges they may incur in connection with such usage (e.g., roaming services, voice service “minute plans,” text message plans). Specifically, we seek comment on whether technological or other differences exist that would prevent wireless providers in this country from employing similar usage controls as those now required by the EU.

The FCC is also looking to see if there are adequate ways for users to measure their voice, text and data usage. I’m fully behind this effort because it seems like a win for consumers and the carriers. The impacts to the end users are obvious, as we constantly see huge roaming bill stories pop up way too often. The carriers do make money off these roaming users but I don’t know if it is worth the price of alienating customers and receiving bad press for it. Additionally, if a customer constantly goes over their limit, this gives the carrier an easy way to upsell them on a voice, text or data plan.

I guess the only credible argument against this is that responsible adults should be able to manage their own bills – as long as there are proper tools – without the government imposing more restrictions on the industry. There’s a bit of validity to this line of thinking but I’m still glad the FCC is looking into this.

How say you, IntoMobile readers? Let us know in the comments.

The world's first commercial LTE network went up simultaneously in Stockholm and Oslo, courtesy of TeliaSonera, and while we've been...