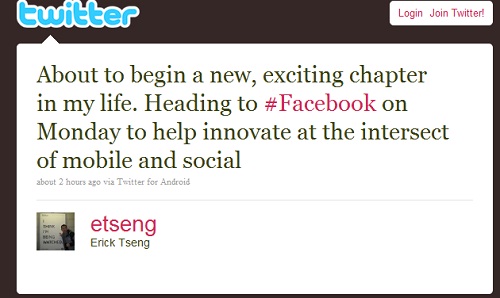 Well, this is a bit of shocking news. It looks like Google’s senior product manager Erick Tseng is leaving the search giant for Facebook. Tseng was instrumental in crafting and honing that Android operating system so many of us love.

“About to begin a new, exciting chapter in my life,” Tseng said in a tweet. “Heading to #Facebook on Monday to help innovate at the intersect of mobile and social.”

This is a major “get” for the world’s largest social network and it should only intensify the growing rivalry between Google and Facebook. Without diving too much into it, the two companies are at odds because Facebook is trying to reshape the online experience to one that’s shaped by your social graph. Google is very happy with the search-centric model, whether it’s on the desktop or mobile, because this has made it into one of the world’s biggest and richest companies.

Back to the mobile side, this shows that the social network is pretty darn serious about the smartphone space. It should be too, as it is seeing tremendous growth in the mobile sector and that may rise if iPhone OS 4.0 has Facebook integration, as expected. For someone like Tseng, Facebook is probably the only place to go that’s more exciting in the mobile space than Google. It also doesn’t hurt that the social network is pre-IPO, so he could very shortly become a multimillionaire once that company goes public.

What does this mean for Android? It’s too early to tell now but this has to hurt it in the short run. The platform has been spitting out new iterations like it’s going out of style and we should see 2.2, or “Froyo,” at next week’s Google I/O conference (yep, we’ll be there giving you the hot scoops). The little green robot has been picking up some traction lately and it finally outpaced the iPhone in U.S. sales last quarter.

So, the move is painful for Android in the short-term but I’m sure Google has the right people (or can throw cash at them) to account for the defection.

The OnStar system in GM's upcoming Volt might be switching to Android according to rumours, which would certainly enable its...