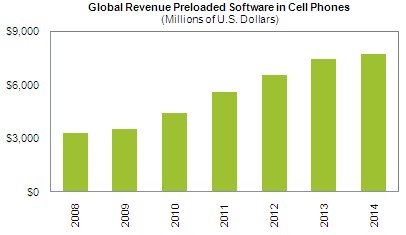 Driven by the growth of smartphones, the global market for preloaded software for mobile phones is set to more than double from 2008 to 2014.

Preloaded software represents applications that are already included in mobile phones when consumers buy them — as opposed to programs later purchased by users. According to iSuppli, this market will expand to $7.7 billion in 2014, up from $3.3 billion dollars in 2008. At the same time, shipments of smartphones are set to rise to 497.4 million units in 2014, which is up from 161.1 million in 2008.

Preloaded software is paid for by OEMs and carriers, either by buying it from third parties or by internal development efforts.

In general, there are three major categories of preloaded apps: native applications that come with the mobile platform (clock, calendar, calculator, organizer and so on), carriers’ branded applications and those developed by third parties.

iSuppli expects the average number of preloaded software in mobile phones will at least double by 2014. Among the apps that will most likely come “in-box” are those dealing with security and backup. Moreover, I would argue that social networking and IM clients are also on that list…

VideoMD.com, a video sharing site that allows physicians to educate their patients better, is out with its own iPhone app....