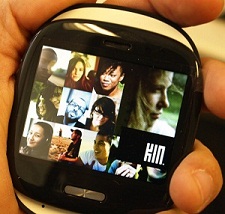 When I reviewed the Kin One, I was ultimately disappointed by the artificial limitations of the “super feature phone,” especially when you consider there will definitely be Windows Phone 7 devices that won’t cost much more. Well, it looks like there won’t be much of a distinction between the two operating systems in the future.

This is good news for soon-to-be Kin owners because I do like the software’s ambitions but quickly ran into the boundaries. Yes, Microsoft, the social-networking generation wants to be able to share content anywhere but they also want to download apps and games. Hopefully, this will be addressed sooner, rather than later.

Sometimes, executives shoot their mouths off and phrase things in the wrong way, but it looks like Microsoft is backing up Sullivan’s statements.

“Both Kin and Windows Phone 7 share common OS components, software and services,” Microsoft said in an e-mail to PhoneScoop. “We will seek to align around a single platform for both products as well as consistent hardware specifications, so we can drive our ecosystem at scale and strength across all products.”

The Kin phones are clearly branded as “Windows Phones” so this makes a whole lot of sense but I’m just concerned that it will take too long for original Kin owners to really take advantage. If you go out and buy these devices tomorrow (or have already pre-ordered the handsets), I’d expect it could take up to a year before Windows Marketplace for Mobile features are implemented. That’s a long time for the I-want-it-now generation the Kin is after and I would have much preferred an app store, even a limited one like the Zune HD, from the beginning.

While there are plenty of mobile productivity options out there, I've found that I'm still most comfortable with Microsoft's Office...