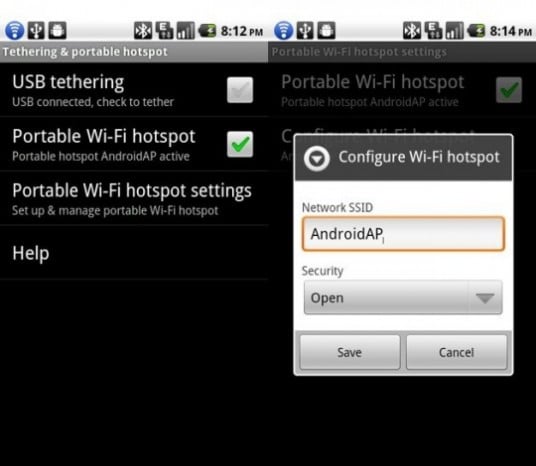 Google has been on a veritable tear with its Android mobile operating system as of late. The recent updates to Android OS have given Apple’s iPhone a run for its money, what with its ability to pinch zoom, translate voice to text, and support enterprise-class email standards. Well, the next version of Android, the Android 2.2 OS – known in geek circles by its Google internal codename “Froyo” (yes, like the frozen dessert) – is about to take this Google vs Apple battle to the next level. Following on news that Android 2.2 boasts something like a 450% speed increase over its Android 2.1 predecessor (codenamed “Eclair”), we now have confirmation that Froyo will offer WiFi and USB-based tethering to Android lovers around the world. The newly discovered feature will allow Froyo users to tether their Android phone over a WiFi connection or via a USB cable.

First, the basics. For the dozen or so of you out there reading this who think that “tethering” a smartphone to a computer has something to do with the elementary school playground game that had you punching a ball-and-rope around a steel pole, let us be the first to set you straight. “Tethering,” in the mobile space is simply a term that refers to a smartphone’s ability to share its internet connection to another device. Whether it’s done using a USB cable or WiFi connection, a “tethered” smartphone allows another device to connect to the handset as if it were a modem.

Right, so now that we’re squared away on the terminology, let’s look at what Froyo is bringing to the table. Thanks to a couple screenshots of the upcoming Android 2.2 OS (pictured above), we now know that Froyo will offer the options to tether the phone using a USB cable or to turn any Android phone into a portable WiFi router – like a MiFi Portable Hotspot.

This single feature could be a game changer for the fledgling mobile operating system and should have Cupertino shaking in their boots. The iPhone offers the ability to tether over a USB cable, but not the option to share it’s Internet connection via WiFi. Combined with a revamped Android Market that is expected to automatically update apps and it’s ability to carry out mathematical calculations with more an four time the voracity of its predecessor, Android 2.2 “Froyo” promises to be a formidable update from Google.

We’re expecting Google to bow Froyo next week at the company’s Google I/O conference in San Francisco. We’ll be coming to you live from the event with all the important details, so make sure to stay tuned!

Samsung seems to be working on a new Android-powered smartphone. Marked as the i5800/i5801, it will run Android 2.1, boasting...