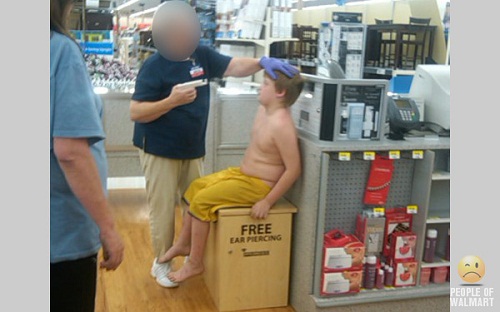 You may soon be able to pick up one of those “magical” iPads while you’re getting a free ear piercing, as Wal-Mart plans to sell Apple’s tablet by the end of the year.

“We anticipate being able to have the iPad later this year,” Gary Severson, senior vice president of entertainment for Wal-Mart’s U.S. stores, told Business Week.

This isn’t much of a surprise because the nation’s largest retailer already sells the iPhone and iPod but it’s another sign that Apple’s tablet is taking off. Wal-Mart is also making a big push for electronics and it wants to take some of the starch out of Best Buy’s collar. It plans to train employees to be more savvy with electronics – they may finally be knowledgeable enough to tell you how to set up a WiFi router or how to properly connect your Blu-Ray player. Don’t laugh, as I’ve found many people tear their hair out over these types of procedures.

Wal-Mart is a critical ally for pretty much anyone who’s selling retail products because it has such enormous reach. This could lead to a boost in iPad sales, but Apple doesn’t seem to be hurting in that regard so far. The tablet has already sold more than 1 million units in less than a month, and it is well on its way to generating $1 billion in the quarter.

Here we go again. DigiTimes is reporting that Apple has already pegged a manufacturer to make up to 10 million...