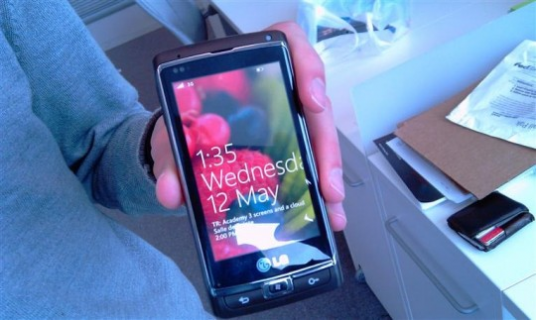 LG is making another appearance with its Windows Phone 7 slider phone today in photo that was posted to Flickr by a French Microsoft employee. With all the buzz around Android and the upcoming Sprint EVO 4G (made by HTC, of course), we had almost forgotten about the completely revamped Windows Phone 7 mobile operating system from Microsoft. So, it’s good to see the Chassis 2 device caught hanging out in the real world.

Last we saw, the LG WP7 slider phone was being shown on stage at Microsoft’s MIX10 conference. Naturally, the conference was focused on the future of Windows Phone 7 and its three-chassis mantra that forces smartphone makers to adhere to device form-factors that meet one of the three chassis setups (Chassis I, Chassis II, Chassis III) set forth by Microsoft. The LG WP7 handset’s large, crisp touchscreen display and sliding QWERTY keyboard form-factor should be a decent success for the mobile phone maker.

We still have no specs on which to drool, but we do have some rumored features to look forward to. The LG handset is supposed to have a 1Ghz Snapdragon processor, a huge capacitive touchscreen, 8GB of onboard memory, GPS, WiFi, accelerometer/light/proximity sensors, a digital compass, a 5-megapixel camera (with flash) and the slide-out QWERTY keyboard. Basically, the rumored specs are the bare minimum of what we’d expect to see in a new WP7 smartphone. The details, though, are still fuzzy – screen size and resolution, onboard memory stores, microSD, etc.

We’ll have to wait for more details on this and other Windows Phone 7 hardware. Stay tuned!