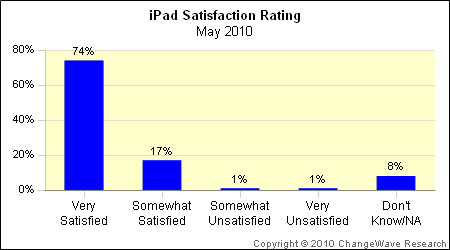 Apple iPad customers are really happy with the “magical” tablet, as a recent ChangeWave Research survey found 91% of users were either “very satisfied” or “somewhat satisfied” with the device.

“The iPad ratings are nearly identical to the highest-rated smartphone among consumers – the Apple iPhone,” ChangeWave said. “But we note that Apple has now reached those nosebleed levels with a brand new product.”

I thought the iPad was just an expensive toy when it was first introduced but am slowly turning around on it because it offers a good experience. With cool video apps from Netflix and ABC, it’s a good consumption device but I’ve been surprised at how well it can handle content creation. I still don’t see it as a laptop replacement but it could get there soon enough.

As for the survey (which only included 153 iPad owners), ChangeWave asked what did they like and dislike about the device. That big, beautiful screen was the most-liked feature, followed by ease of use, overall size and then portability. In a note that must make Steve Jobs wince, the top dislike was the lack of Adobe’s Flash.

The lack of Flash in the iPhone OS, which powers the iPad, could become a major detraction because nearly every other platform will be able to support it soon. Android users can play around with Flash right now and that OS will definitely wind up in iPad competitors. Palm’s webOS will soon gain this ability as well, and it could only be a matter of months before we see that platform on a tablet.

Jobs doesn’t believe Flash is appropriate for its mobile devices due to performance issues, battery life and the lack of touch optimization. There are some valid points here but in our hands-on time with Flash on a Nexus One, we’ve found that is a smooth experience that really adds to the mobile web.

Still, it hasn’t seemed to hurt Apple too much, as the iPad already sold more than a million units and it’s well on its way to generating more than $1 billion in the quarter.

AT&T not worried about Verizon iPhone

You would think that all those iPhone-to-Verizon rumors would keep AT&T up late at night but its wireless head doesn't...