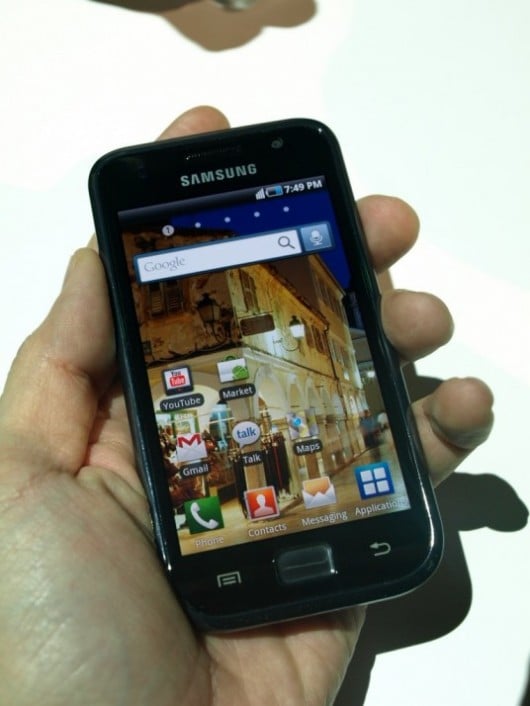 The Galaxy S was shown off at the Google I/O this week, and it’s definitely something to be admired. The customized OS looks painfully similar to the iPhone OS in some areas, but it’s the hardware where the Galaxy S shines. Sporting the ‘hummingbird’ GPU, the S is king of graphics processing when it comes to mobile phones today, and now we have a video seeing the device in action.

Earlier, we reported just how good the Galaxy S is in terms of GPU when compared to the competition, but it wasn’t until now that we’ve seen the thing actually perform, and perform is does. The video below shows the power of the device, playing a game without any sightings of lag, just seamless gameplay. While it may not have a 8 megapixel camera with flash, or a front facing camera, the S most certainly holds its own with a great GPU and a gorgeous Super AMOLED display. It’s rumored to be headed to T-Mobile as a part of their Project Emerald, so we may actually see this device sooner than later.

If I don’t see the Motorola Shadow come out sometime this summer (I know, I can’t let it go), the Galaxy S is going straight to the top of our Android list. The Galaxy S would surely be T-Mobile’s best Android device, which they really need.

The device is a heavyweight in terms of specs, but still lacks some things that we’ve been used to with previous Android devices. Why oh why couldn’t they throw just one LED flash in the thing is beyond me. Still, the Galaxy S has power behind it that the competition doesn’t – like the insanely bright, crisp Super AMOLED screen.

Gowalla for Android Updated with Photo Sharing, Comments, and More

After adding some more basic features, like spot search and events, Gowalla's social location app for Android has filled a...