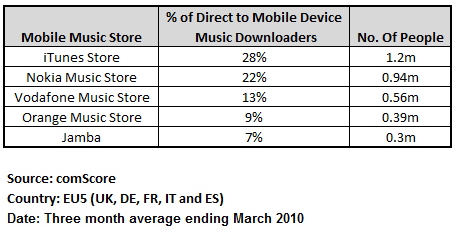 Nokia Music Store is slowly approaching the iTunes numbers in Europe. Apparently, out of about 4.3 million people who actually download/pay music in five major European markets (UK, France, Italy, Spain and Germany), 28% get their songs via iTunes, while 22% (0.94 million) do that from Nokia’s store.

4.3 million people, what? And here’s an even weirder number – only 23.8% of mobile users in the five mentioned countries have listened to the music on their mobile phone. As for the U.S., the percentage of people that have played music using their mobile phone is even lower – 13.2%. Does the rest still uses dedicated music players or what? Virtually every mobile phone, even some low-end models, can play music files so why aren’t people using them is beyond me.

Anyway, it’s good to see iTunes is getting some serious competition in parts of the world. I assume, Nokia’s figures are even better in Asia, but we don’t have numbers to prove that.

In the meantime, you can check out comScore’s full press release with additional details.

Phoenix-based Mobile Bytes is out with a new iPhone app/service called YWaiter, designed to save restaurant goers money and time...