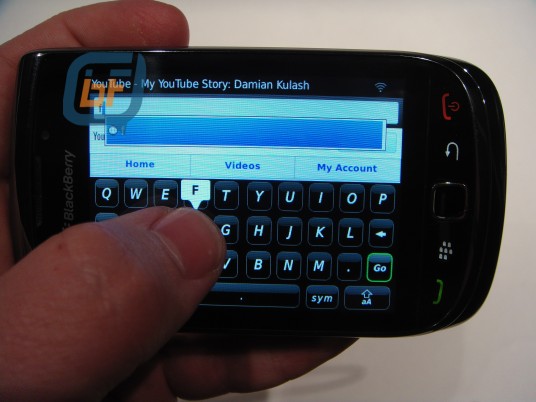 We’ve got some more pictures of the upcoming BlackBerry slider to add to the pile, notably showing off the on-screen keyboard. It was hard to tell at first if the BlackBerry 9800 was going to include a touchscreen in addition to the trackpad and physical keyboard, but this picture confirms it. A few of the other pictures show us around the OS, including the media player, the upgraded Webkit browser, and the new podcasts app. From what we know, the BlackBerry Bold 9800 will have an HVGA display, Wi-Fi 802.11n, 4 GB of on-board storage, 512 MB of RAM, and OS 6.0. Unfortunately, the only rumoured release date we have right now is June for AT&T.

These are probably the sharpest pictures of the BlackBerry 9800 we’ve seen to date, and the most we have seen of OS 6.0 in action. There are plenty of manufacturers that include a touchscreen, physical keypad, and directional input on their phones, but this is the first time we’re seeing all three together on a BlackBerry. From my experience, text selection was a hassle on both generations of the Storm, but the optical trackpad on the BlackBerry Bold 9800 should keep things precise. The clincher for a lot of potential buyers will be if this slider has SurePress; RIM’s making improvements to its clicking touchscreen, sure, but the concept is still foreign to a lot of people and makes for a hard sell. There is the distinct possibility that the 9800 has a standard capacitive touchscreen, which could make a lot of customers happy on the one hand, but could signal that RIM’s not willing to push SurePress as hard as they used to. Maybe it’s a technology they’ll reserve solely for the Storm family, but we’ll have to wait and see.

I don’t know about you guys, but this new Bold is really growing on me – if it has a 5  megapixel camera, I’ll be sold on upgrading from the trusty old 9000 Bold.