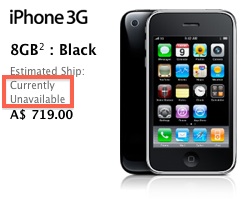 If you’ve been waiting for the next-gen iPhone HD / 4G to drop next month at Apple’s WWDC conference so that the iPhone 3GS will drop in price, we’ve got good news. Apple stores in the US and abroad are reportedly seeing their iPhone 3G stock running low, with restocking measures nowhere to be seen. The low-inventory status echos Apple’s traditional pattern for itshandset  launches – dry up inventories on older hardware, drop a hot new phone , and move the most recent iPhone to the all important, entry-level $99 slot .

When Apple brings the iPhone 4 into the spotlight at WWDC, we’re going to finally have a clearer picture of the company’s plans for the outgoing 3GS model. Most had assumed that we’d see the 3GS getting cheaper when the new iPhone 4 goes live, but reports of Apple stores no longer restocking 3G units and international orders showing “Currently Unavailable” status lends that assumption more credibility.

While most will be focused on the launch of the next iPhone, there are no doubt plenty of folk that would be more than happy having an iPhone 3GS at half the price of the higher-spec’d HD (or 4G, whatever they decide to call this thing). Of course, those cheaper 3GS models will only be available on AT&T’s network, regardless of whether or not there’s an iPhone headed to a non-AT&T network near you.

[Via: MacRumors and BGR]

AT&T agrees to unlock phones, except the iPhone

AT&T has agreed to provide unlock codes for your phones in a class-action lawsuit settlement but the agreement doesn't include...