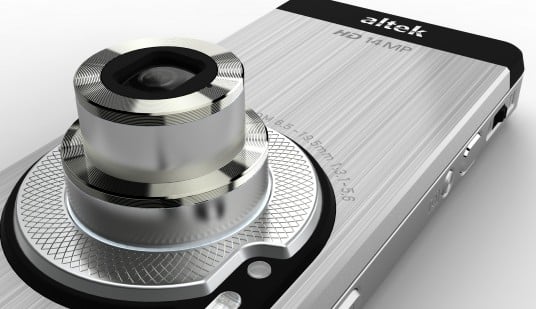 Last summer, Altek made a cameraphone with 12 megapixel camera and 3 x optical zoom, but have today upped the ante with a 14 megapixel model. Yeah, it’s not all in the megapixel count, but damn if that isn’t just a little impressive. The Leo also keeps the 3 x optical zoom and both LED and Xenon flash. as well as HD video recording. The actual phone part of the phone sounds passable, including 3G and Wi-Fi, and might be running Android, considering the keys below the touchscreen and smartphone label.

12 megapixel cameras in specialty phones like the Samsung Pixon12 and the Sony Ericsson Satio are just now starting to come to market, while 8 megapixel cameras are becoming commonplace in upper-end smartphones, like the Galaxy S, X10, Evo, and Incredible. I’m curious of Altek’s announcement will put a fire under the manufacturers to bump up their pixel count, or if they’ll continue refining their existing technology. It’s a bit of a toss-up, really – if your camera has bad software, it doesn’t matter how many pixels it captures.

If Leo actually does run on Android, the only thing to be worried about is the camera’s sensor, rendering and lens quality. If they’re solid, I would really love to see this phone in North America, but considering the Altek Leo will be launching in June at the CommunicAsia conference, I won’t hold my breath.

More White BlackBerry Bold 9700 goodness, I love it! This time, the good folks in India are going to want...