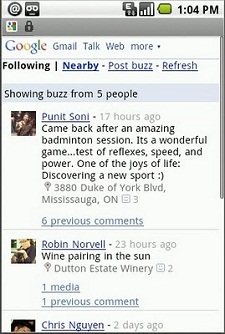 You wouldn’t have been off much if you called Google’s social networking service “Buzzz” because it was quite underwhelming, but the search giant continues to add features to its service and now Google Buzz is available on more mobile devices.

The service was previously available for the iPhone and Android 2.0 devices and higher but there is now an XHTML version that can be accessed directly through the browser for multiple devices including BlackBerry, Windows Mobile, S60 and more.

Buzz was launched in February and it was pretty much a dud for multiple reasons. It launched within Gmail and I think this was a fundamental misunderstanding about how users wanted to interact with their social networks. There were tons of privacy concerns because it automatically included some of your Google contacts and I just found it kind of annoying. Google has been quickly making changes though, and its mobile versions offer the ability to check-in at local venues. There are also Android widgets now, which make it easier to use on the go.

It was overshadowed by the Froyo, Google TV, and Latitude API news, but Google also rolled out a Buzz API last week. This can be used by desktop and mobile app makers to read and write to Buzz and it is already being used by social-networking clients like Seesmic and TweetDeck.

I’m still not a huge fan of Buzz but these are indicators that Google is serious about making this a success, so maybe I’ll give it another try. With Facebook, Twitter, Foursquare, and all the others, I’m still not convinced I need another social network, though. What’s your experience been with Buzz, readers?