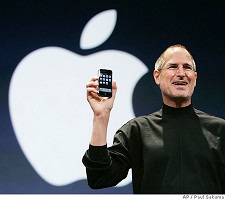 Well, it looks like the iPhone is not just for the hipsters making fashion statements, as AT&T said four out of ten iPhone sales are going to enterprises.

AT&T CEO of Business Solutions, Ron Spears, threw out this figure during a Barclays Capital conference Thursday and some analysts believe he may be spinning the numbers a bit. Some users may buy the phone by themselves and use it for business e-mails and purposes, which may be part of the user base Spears is accounting for.

One thing is certain, though, the iPhone is gaining traction in the business markets and Research In Motion should start to be worried. The BlackBerry maker is still rock-solid with its security and corporate features but users are increasingly demanding more consumer-friendly features. That’s a big reason why RIM is throwing a lot of visual panache and touch controls into BlackBerry 6.

Apple has slowly made the iPhone a better corporate device with each software upgrade. It now has remote wiping, strong Exchange support and businesses can deploy their own custom apps. The one major flaw is the lack of multitasking for monitoring and provisioning, but that should be addressed with the 4.0 software in a few weeks.

Still, it’s not all gravy, as the enterprise app space for iPhone is not as robust as for the BlackBerry, according to analysts.

“It would not be accurate for people to conclude [from Spears’ comments] that people are building comprehensive applications for offline iPhone operation to the degree that is even found on RIM BlackBerries,” Ken Dulaney, a Gartner analyst, told ComputerWorld.

I used to cover the enterprise mobility space in detail at my last gig and was always shocked at the impact the iPhone had. There were multiple companies that were strictly BlackBerry-only because of that platform’s security features, but those policies were quickly thrown out the window once a CEO or high-ranking executive got an iPhone. It’s just another sign that consumer interests are driving corporate policy, which is a good sign for companies like BoxTone, which offers multi-platform business management tools.