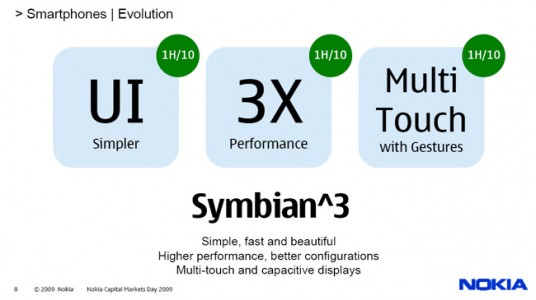 Nokia has been having a hard time keeping up with snazzy new smartphones powered by the iPhone OS and Google’s Android mobile operating system, but the Finns are looking to rejuvenate their handsets with the launch of Symbian^3 later this year. But, rather than launch Symbian 3 on the Nokia N8, as has been expected, the updated Symbian platform will apparently launch on a smartphone from an “Asian vendor.” The more user– and developer-friendly Symbian^3 OS is due to be launched in the third quarter, after a delay that pushed back it’s initial first quarter launch window.

Word of the first smartphone to run the new Symbian OS comes straight from the source. Symbian Foundation executive director Lee Williams said in an interview that the simpler and more eye-catching Symbian 3 UI was headed to market and added that the platform is almost code complete. The first device to make use of the platform, it seems, could come from Asian smartphone powerhouses like Samsung, HTC or even LG, although Williams was tight-lipped about exactly which vendor would take first dibs on the new version of Nokia’s go-to OS.

Nokia recently bought the rights to the entire Symbian code base, with the sole intention of making the mobile operating system free for all to us and improve. The Symbian Foundation is responsible for making sure that the platform stays neat and tidy. So, it’s interesting that the first Symbian^3 phone will not come from Nokia, but rather from an Asian smartphone maker. Speculation has Nokia testing out the waters in the smartphone market with a device that isn’t directly tied to the them. If all goes well, Nokia will likely follow up the inaugural Symbian 3 device with their own N8, regardless of how much of an embarrassment it might be to Nokia.

Samsung is bringing the Wave to its own backyard. It's pretty much the "regular Wave" with the addition of T-DMB...